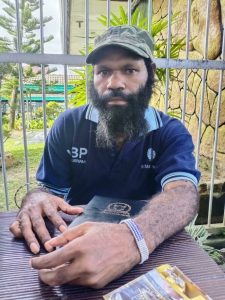 Arrested in the afternoon of 17 September 2019 in Abepura, Papua, by Papua Regional Police without arrest warrant. He is the chair of KNPB and accused of the intellectual actor behind the uprising. Besides Articles 106 and 110, he is also indicted with Articles 160 of the Criminal Code and Article 82 section (2) of Law Number 2 Year 2017 regarding Societal Organisations. He told his lawyer that he participated on the 19th of August protest, but only monitored the 29th August protest from his organisation’s secretariat. When arrested, he was on a motorbike with his friend Donny Itlay. The latter was arrested as well, but charged over theft of his rented motorbike. Itlay’s verdict of 7 months imprisonment was delivered on 18 February 2020.