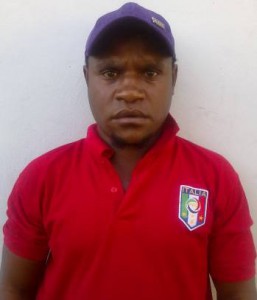 Andinus Karoba, an activist belonging to the Koteka Council of Indigenous Peoples (Dewan Masyarakat Adat Koteka, Demmak), is currently serving a one year and ten month sentence in Abepura prison under charges of Article 365(2) of the Indonesian Criminal Code and Law 8/1981 for theft accompanied by use of force.

A report received by a local human rights activist states that on 10 October 2012, Karoba was stopped and forcibly arrested by police intelligence officers who took him to Jayapura Regional police station. He was shot three times in the calf and thigh while his hands and feet were tied on the way to the police station. He was detained and kept in isolation for two months in Jayapura Regional police station while awaiting trial, and was allegedly handcuffed throughout the duration of his detention. He was also reportedly denied family visits and was not given medical treatment for his gunshot wounds.

The report states that despite allegations of theft, police interrogated him regarding pro-independence activities, unrelated to any suspicions of theft. There was also no mention of stolen items in the police investigation report. Throughout his trial, Karoba was denied a lawyer and his family members were reportedly not allowed to attend the trial. Reports from local activists state that Karoba has declined medical treatment in Abepura prison as he is fearful of potential abuse at the hands of the authorities, similar to the brutal treatment he previously endured in detention in Jayapura Regional police station.

According to Karoba, he was targeted by the police due to his family history. His family was part of the 1977 mass exodus to Papua New Guinea to escape Indonesian military brutality and as a consequence he was allegedly branded as a member of the Free Papua Movement (Organisasi Papua Merdeka, OPM). The report claims that Karoba’s work with Demmak caused police to single him out as a target for arrest.

On 12 February, he was released on parole and is the required to report to the Jayapura Office of the Ministry of Law and Human Rights for three months.