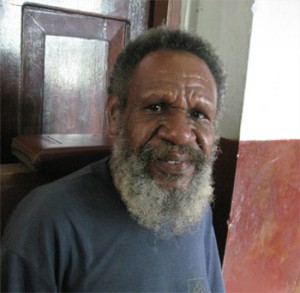 Apotnalogolik Enos Lokobal is a farmer from Pugima village near Wamena town in Jayawijaya district, and was 37 years old at the time of his arrest in 2003. Following an alleged raid on the Jayawijaya District Military Command weapons arsenal on 4 April 2003, Mr Lokobal was arrested and charged with treason.

According to a 2011 report by the Alliance of Democracy for Papua (Aliansi Demokrasi untuk Papua, ALDP), Mr Lokobal has stated that following the Second Papuan People’s Congress in 2000, he was appointed as Commander of the Wamena TPN/OPM unit, resulting in him being placed on the police ‘wanted’ list (Daftar Pencarian Orang, DPO). Mr Lokobal believes this is the reason why, following the incident on 4 April 2003, he was one of the first to be detained.

After the alleged raid on the weapons arsenal, Mr Lokobal was arrested by the military on 10 April 2003. A report by a local NGO coalition states that initially, Mr Lokobal, Kimanus Wenda, Kanius Murib, Jefrai Murib, and Numbungga Telenggen were detained in the Jayawijaya District Military Command for around five days, far exceeding the 24-hour limit for military detention. They were then handed over to the Jayawijaya Police Station on 15 April 2003. A report by the Office for Justice and Peace (Sekratariat untuk Keadilan dan Perdamaian, SKP) states that when Mr Lokobal and the other detainees arrived at the police station, the police sent them to the local hospital for a medical check. Doctor Berry Wopari reportedly found that they had all sustained severe wounds and were unwell, with the exception of Kanius Murib.

According to a report made to the Committee Against Torture, while in military detention Mr Lokobal was handcuffed and kicked until unconscious by ten members of Indonesia’s military Special Forces (Komando Pasukan Khusus, or ‘Kopassus’), who tried to force him to sign a confession. After he regained consciousness he was reportedly kicked again, this time in the head. He was also cut on his thumb and ankle and endured further torture. On 19 April 2003 while in police detention Mr Lokobal states he was tortured again, this time by the police Mobile Brigades (Brigade Mobil, or ‘Brimob’). Again he was kicked until he was unconscious, had a bottle rammed into his mouth and was burnt on the armpit, knee and genitals with cigarette butts.

A report by ALDP (undated) noted many accusations of irregularities in the trial. These included the lack of translators and the prosecution remaining almost silent throughout the trial as their role was being assumed by the judges themselves. The judges reportedly failed to respect the defendants’ rights to be assumed innocent until proven guilty, and pushed the prisoners to accept the state’s version of the story. They also repeated prejudices about the local people of Wamena, such as “people here are lazy and stupid.” According to a 2008 document signed by a government official based in Jayapura, Mr Lokobal was found guilty under the charges of treason (article 106 of the Indonesian criminal code) and conspiracy (article 110) and was sentenced to 20 years in prison.

There have been a number of concerns raised about the treatment of those incarcerated in connection with this case. In 2004 while imprisoned in Wamena prison, Mr Murib and the other people accused of the raid on the weapons store were reportedly “still being intimidated by the intelligence of the Military District Command and Police Mobile Brigade, even when in jail,” according to Ms Anum Sirigar, a member of their legal team. They were also allegedly being denied access to the prison hall, where they were supposed to be able to meet their families or take exercise, because the military were using it for their own purposes. When his co-accused were moved to Makassar prison in late 2004, Mr Murib was allowed to remain in Wamena, on account of his age.

A report by ALDP (2008) describes the forced removal of Mr Lokobal from Wamena prison, where he was initially held. On 15 December 2004 he, along with eight other prisoners, was reportedly woken in the middle of the night, beaten until bruised and bleeding and forced to get on a police vehicle. The prisoners were moved to Gunung Sari prison in Makassar on the island of Sulawesi, far from their families. The sudden nature of this move caused fears for their safety at the time. Following the death of fellow prisoner Michael Heselo in Makassar hospital in August 2007, and subsequent protests, the remaining eight prisoners were returned to Papua. Mr Lokobal requested to be near his family in Wamena or Jayapura, but was instead moved to Biak prison on 28 January 2008, along with Jefrai Murib and Numbungga Telenggen.

Local NGO United for Truth (Bersatu Untuk Kebenaran, BUK) reported that when political prisoner Filep Karma was permitted to receive a medical operation in 2010 following a long campaign, he pointed out the lack of medical attention being given to other political prisoners, and highlighted amongst others the case of Mr Lokobal in Biak prison. In February 2012, TAPOL received a handwritten letter from Mr Lokobal. In the letter he details ill health including a swollen back and knee, rheumatism, and being diagnosed with several types of malaria during November 2011, adding “I am still quite wobbly on my feet.”

Mr Lokobal writes in prison, and his letters and poems have been read out at several events focussed on human rights, such as an event campaigning against torture in 2008 organised by ALDP and other groups.