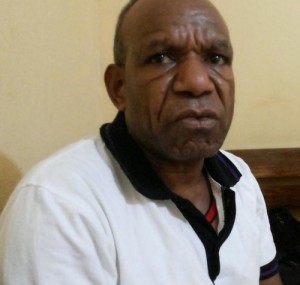 On 6 August, Areki Wanimbo was arrested alongside Deni Douw, Enius Wanimbo, Jornus Wenda, Ahky Logo and two French journalists, Thomas Charles Dandois and Valentine Bourrat, in Wamena in the Central Highlands of Papua. Dandois and Bourrat have since been released after being sentenced to two-and-a-half-months imprisonment for breaching Article 122 of Law 6/2011 on Immigration. Areki Wanimbo remains in detention while the rest of those arrested were released without charge.

On the day of his arrest, Wanimbo, a tribal leader from Lanny Jaya, met with Dandois and Bourrat at his home in Wamena. The two journalists had intended to ask the tribal chief about the humanitarian situation following fighting which had broken out in Lanny Jaya between security forces and an armed movement headed by resistance leader Enden Wanimbo. The two journalists were arrested on their way back to their hotel, alongside Ahky Logo, the Head of the Foundation of Community Teaching, Education and Development (Yayasan Pendidikan Pengajaran dan Pembangunan Rakyat, Yayasan YP3R). Police then returned to the home of Areki Wanimbo to arrest him. Deni Douw and Jornus Wenda, who were also at his home, were also arrested. It is believed that another Papuan, Enius Wanimbo, was also arrested and later released without charge, but it is unclear exactly when and where. Lawyers with the Democracy Alliance for Papua (Aliansi Demokrasi untuk Papua, ALDP), who are currently representing Areki Wanimbo, reported that the three men were verbally abused and received death threats from police officers on arrest. The following day, Enius Wanimbo, Deni Douw, Jornus Wenda and Ahky Logo were released without charge after being interrogated overnight without any legal accompaniment.

While initial accusations against Areki Wanimbo and the four other Papuan men were in relation to the breaching of immigration rules, given that the two journalists were working on tourist visas, the interrogation reportedly shifted to the situation in Lanny Jaya. Areki Wanimbo was then also accused of buying ammunition to give to the pro-independence armed movement the West Papua National Liberation Army (Tentera Pembebasan Nasional Papua Barat, TPNPB). While he initially faced charges of possession of ammunition under Emergency Law 12/1951 and breaching immigration rules under Article 122 of Law 6/2011 on Immigration, charges were later changed to conspiracy to commit treason under Articles 106 and 110 of the Indonesian Penal Code.

On 9 August, Dandois and Bourrat were transferred to Papua Provincial Police Headquarters (Kepolisian Daerah Papua, Polda Papua) for further interrogation. They faced charges of breaching immigration rules under Article 122 of Law 6/2011 on Immigration, which carries a maximum sentence of five years’ imprisonment and a maximum fine of IDR 500 million (around USD 42,700). Police had previously stated that the two are suspected of espionage and attempting to destabilise Papua. On 27 October 2014, the two journalists were released from detention in Jayapura Immigration Office (Kantor Imigrasi Klas 1A Jayapura) after being sentenced to two-and-a-half-months imprisonment for breaching Article 122 of Law 6/2011 on Immigration.

On 12 August Wanimbo was transferred to Polda Papua, without the knowledge of his lawyers, to undergo further interrogation while awaiting trial. The four Papuan men who were released without charge, along with human rights activist Theo Hesegem, have now been called to act as witnesses during the trials of Wanimbo, Dandois and Bourrat.

On 16 September, one of the ALDP lawyers representing Wanimbo, Latifah Anum Siregar, was attacked in Wamena on the way back to her hotel after a pre-trial hearing for Wanimbo’s case. At around 19.30, Siregar was attacked by an unidentified person armed with a knife who stole her bag and injured her hand before fleeing the scene. It is believed that she may have been targeted for her involvement in Wanimbo’s trial.

Since 10 September, pretrial hearings were held examining the legality of the arrest of Areki Wanimbo. Defence lawyers from ALDP argued that the formal requirements of an arrest were not met by Jayawijaya Regional police at the time of arrest. Lawyers also stated that the arrests were unprocedural as Wanimbo was arrested without an arrest warrant and he was detained in Jayawijaya Regional police station in Wamena for more than 24 hours without a detention warrant. Lawyers also criticised police for arresting Wanimbo based on charges which were then dropped and replaced by different charges. On 29 September, Wamena District Court ruled in favour of Jayawijaya Regional police, stating that the arrest was conducted in compliance with regulations.

On 18 September, a fight that broke out between two groups in Lanny Jaya led to the burning down of two traditional honai houses belonging to Areki Wanimbo. Information received from the Advocacy Network for Upholding Law and Human Rights (Jaringan Advokasi Penegakan Hukum dan HAM Pegunungan Tengah Papua, JAPH&HAM) alleged that at the time of the incident, Jayawijaya Regional police were present at the scene and made no efforts to stop the violence and arson. While it does not seem that the burning down of the houses was in any way related to the trial Wanimbo is currently facing, police may have allowed the incident to happen due to the fact that Wanimbo is currently standing trial for charges of conspiracy to commit treason.

Wamena-based human rights investigators reported that witness testimony presented during court hearings in February revealed inconsistencies regarding the case. One of the witnesses, Nursalam Saka, a Jayawijaya police intelligence officer, testified that a document by the Papuan Customary Council (Dewan Adat Papua, DAP) signed by Wanimbo was a crucial piece of information that led to his arrest. The document asks for donations for upcoming meetings with the Melanesian Spearhead Group (MSG). Human rights lawyers argued that Areki was arrested on suspicion of hiding weapons, but that police have not yet found any evidence to prove this. Instead, police used the DAP document, although insufficient as evidence, as an excuse to prolong his detention.

Defence lawyers for Wanimbo stated that he has requested that the two journalists testify on his behalf.