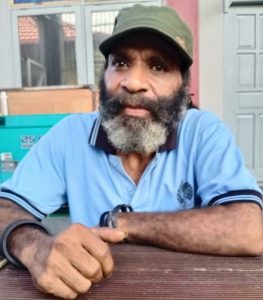 Update:
He was arrested without arrest warrant on the afternoon of 9 September 2019 while he was gardening behind his home. The arrest was conducted with excessive use of force involving a helicopter, electricity was cut off then troops storming in and breaking doors while shooting. He is one of the most prominent pro-independence leaders in West Papua and is currently the head of National Parliament of West Papua. This is the third time he is being imprisoned for his political activity. Police accuse him as the intellectual actor behind the uprising and charge with Articles 106, 110, and 160 of the Criminal Code. Tabuni told his lawyer that on 15 August he met another pro-independence activist on 15 August 2019 and later made a public statement on his Facebook account he would not be involved in any anti-racism protests because he did not believe it could lead to an independence.

On 4 October 2019, Buchtar Tabuni and six other prisoners were transferred from Papua Regional Police Detention Center, Jayapura, Papua Province to East Kalimantan Province for “security reasons”. This transfer was in breach of Indonesian criminal procedure law; it was conducted, inter alia, without informing their lawyers and families, and without the requisite approval from the Supreme Court. Further to these breaches, the transfer has resulted in a significant increase in legal aid costs (due to the airfares needed to attend each trial), and has cut the prisoners off from their families and culture.

——-
Buchtar Tabuni is a well-known political activist for West Papuan independence. He was formerly the leader of the West Papua National Committee (Komisi Nasional Papua Barat, KNPB), a group that has organised mass demonstrations in cities across West Papua with the central demand of a referendum on independence for West Papua. His activism has made him a repeated target for the Indonesian regime and he has been sentenced to prison twice.

Mr Tabuni was arrested for the first time on 3 December 2008 by the police Criminal Investigation Department, without a warrant. The arrest was related to a peaceful demonstration he had organised on 16 October earlier that year in support of the launch of the International Parliamentarians for West Papua in London on the same day. The Asian Human Rights Commission (AHRC) reported that Mr Tabuni was charged with treason under Articles 106 and 110 of the Indonesian Penal Code, together with Article 160 (incitement) and Articles 212 and 216 (resistance to authority) as subsidiary charges.

Both before and after the verdict Mr Tabuni was subjected to physical violence on several occasions. For example, while still in police detention, no water was available for washing or drinking. When Mr Tabuni complained he was struck by a policeman, and afterwards his lawyer was refused access to visit him at the police station. This incident was reported by the Alliance of Democracy for Papua (ALDP) and the Free West Papua Campaign.

Another incident, documented by the AHRC, occurred when Mr Tabuni was transferred from the police station to Abepura Prison. On arrival at the prison he was beaten by an official causing severe injuries to his eye. Six other political prisoners reacted to this by filing a complaint with the Prison Governor, after which they were also beaten. All seven men were held in a cramped isolation cell (trapsel) with no access to food or water for four days. Human Rights Watch documented another incident in November 2009 where Mr Tabuni was attacked by three soldiers, one policeman and one prison guard, causing him to bleed profusely from his head. The Prison Governor refused to allow him to be treated in a hospital.

When the panel of judges finally handed down their judgement on 3 July 2009, Mr Tabuni was found not guilty of the primary charge of treason. However, just as the defence team were raising their fists in celebration, the judge continued, finding Buchtar guilty of the subsidiary charge of incitement and sentencing him to three years in prison. In ALDP’s report of the sentencing, Iwan Niode, an ALDP lawyer and part of Mr Tabuni’s legal team, wondered if the judges gave this strange and unexpected verdict because they lacked the courage to release Tabuni directly. He also pointed out that to find someone guilty of incitement, it should be clear which crime they were alleged to be inciting people to commit, which remained unspecified.

On 3 December 2010, while Mr Tabuni was still in prison, a former prisoner called Miron Wetipo was shot dead. Reports of this incident are conflicting; some sources report that the shooting occurred as he was escaping from prison, others that it occurred during a sweeping operation in Abepura. The police and prison officials have never given their version of events. Nevertheless, when news of the shooting spread through the prison a riot broke out and angry inmates damaged the prison. Mr Tabuni was blamed for inciting the riot, along with fellow political prisoner Filep Karma and three other prisoners charged with criminal offences. Mr Tabuni has always maintained that he was instead trying to mediate and keep the situation calm, by conveying to the authorities the prisoners’ demand to bring Miron Wetipo’s body to the prison and find his killer.

The five men accused of inciting the riot were transferred from the prison to the Papuan police headquarters, where according to a report published by West Papua Media Alerts, they were denied food and water for several days, and families and friends were denied access. Mr Tabuni was held in the police station for several weeks, unsure of whether he was being held as a convicted prisoner or awaiting trial for new charges from the riot. In a letter from prison, he explained that he was suffering from gastric problems and other health issues as a result of the inadequate food. Amnesty International issued an Urgent Alert at this time, concerned that Mr Tabuni was at serious risk of being tortured while in solitary confinement in the police headquarters.

Mr Tabuni was offered remission on 17 August 2011, Indonesia’s Independence day. He chose to accept this offer of release but continued his role as leader of the KNPB.

Almost one year later on 6 June 2012, Mr Tabuni was arrested again together with two other KNPB activists, after leaving a meeting at the Papuan Provincial Parliament (DPRP) building. Assa Alua, one of the other two men arrested, told news website Suarapapua.com that the three men were beaten and tortured from the moment of their arrest, that they were not allowed to telephone a lawyer and that police tried to force them to confess that they were involved in recent shooting incidents. The following day, Detiknews reported that according to the Vice-Head of Provincial Police, Paulus Waterpauw, Tabuni was suspected of various violent actions, including the fatal stabbing of two people.

When lawyers were finally allowed to contact the three men it became clear that Mr Tabuni was in fact being charged in connection with the prison riot eighteen months previously. The police have offered no explanation for the lengthy delay in following up this case, and why the charges brought differed so widely from those printed in the press at the time, in which police suggested that Tabuni was a murder suspect.

The context of Mr Tabuni’s second arrest may be connected to the fact that the KNPB had organised several powerful demonstrations during previous weeks. Reports in local newspaper Bintang Papua chronicled how over recent weeks police had issued several summons to Mr Tabuni to impose controls on the demonstrations, and threatened his arrest if he refused to attend.

In addition to this, a chain of mysterious shootings had been occurring on an almost daily basis in Jayapura at the time, causing fear and tension across the city. The statement of Paulus Waterpauw appeared to implicate Mr Tabuni in these shootings, and some media outlets (eg VivaNews) reported him as being under suspicion. One week later, when plain clothes police assassinated another KNPB leader, Mako Tabuni, many press reports cited police sources blaming Mako and the KNPB for the shootings. However, Buchtar Tabuni’s second trial focused only on the prison riot; no charges have so far been brought regarding either KNPB demonstrations or the shooting incidents.

Mr Tabuni was tried for the second time and convicted under article 170 of the Indonesian Penal Code which relates to violence against persons or property. He was sentenced to eight months in prison. Dominggus Pulalo was also tried for this offence; he had been imprisoned on non-political charges in 2010 and was also accused of rioting in the prison. One of his lawyers, Gustaf Kawer was reported in Bintang Papua highlighting the lack of evidence for this conviction, as key witnesses including former Prison Governor Liberty Sitinjak did not appear to give evidence in the trial. In an article published by ALDP, Gustaf Kawer also notes that the evidence of one of the five witnesses who did testify was used despite the fact that it had been revoked. He also questioned the use of article 170, which refers to violence to people or property conducted by “united forces” (ie a number of people). The requirement that the crime be proven to be a joint action was ignored by the court, he said.

A number of reports have been published describing repression of activists during the trial. Tabloid Jubi reported that KNPB members had received threatening phonecalls and text messages, warning them to stay away from the trial. Then on 23 July 2012, Bintang Papua reported that former political prisoner Yusak Pakage was arrested while attending a trial hearing as an observer. Frustrated by the proceedings, he kicked over a waste bin, spilling some chewed Betel nut on the clothing of a court official. While this was the incident which seemed to trigger arrest, he was later held under emergency laws for possession of a weapon (a penknife). Amnesty International issued an urgent appeal in support of Mr Pakage after learning that he had been threatened with torture, and interrogated about his political activities and efforts to raise money to support sick political prisoners. The KNPB has also claimed that at the hearing on 6 August 2012, police tried to arrest another of their leaders Victor Yeimo for unknown reasons, however Yeimo managed to escape on a motorbike.

Buchtar Tabuni was reportedly released from prison on 19 January 2013 after completing his sentence.

Free West Papua Campaign, “News from the prison Sebby Sambom and Buchtar Tabuni were isolated from their lawyers,” [undated], http://www.freewestpapua.org/index.php/news/866–news-from-the-prison-sebby-sambom-and-buchtar-tabuni-were-isolated-from-their-lawyers-