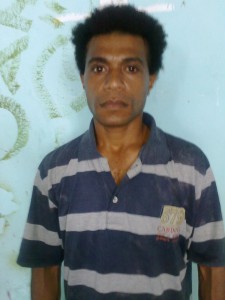 Daniel Norotouw and Isak Demetouw (alias Alex Makabori) from Jayapura, and Niko Sasomar and Sileman Teno from Sarmi were arrested on 3 March 2013 by four members of an army task force. On 1 March 2013, the four men headed to Sarmi from Jayapura. According to their version of events, given in an interview with a local activist, they intended to carry out a socialisation for residents in Sarmi, aimed at raising awareness regarding political developments in Papua and violations that have occurred due to the ongoing conflict. A local source has reported that this event took place on 2 March, from 19.00 to 20.30 local time, during which the four men received information that the Indonesian military were aware of their whereabouts and activity.

On 7 November 2013, Daniel Norotouw was sentenced to one year in prison while Demetouw, Sasomar and Teno were sentenced to  two years and two months’ imprisonment. On 1 February 2014, Norotouw, was released after the completion of his one year prison sentence.