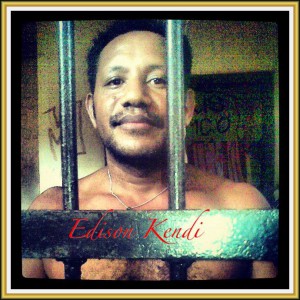 Edison Kendi, from Yapen island, is an activist involved with the West Papuan National Authority (Otoritas Nasional Papua Barat, WPNA). He was also reportedly appointed as Vice Governor of Saireri by the Federal Republic of West Papua, after that group declared the restoration of independence at the Third Papuan People’s Congress in October 2011. His prominent role appears to have made him a target for police repression; during the course of 2012 Kendi was arrested twice, each time on a demonstration.

The first arrest took place on 10 July in Jayapura, at a rally with the theme “Save Papua from Genocide and Grievances.” According to a report by West Papua Media alerts, Kendi was arrested outside the Provincial Legislative Council together with the demonstration’s organizer Sius Ayumi, while Ayumi was trying to negotiate with police.

Kendi was arrested for a second time barely a month later at a march in Serui on Yapen Island. This time the event was to commemorate the United Nations ‘International Day of the World’s Indigenous Peoples’ on 9 August 2012. Amnesty International has reported that police and military troops dispersed the demonstration by firing into the air. They then arbitrarily arrested at least six demonstrators, in some cases using violence. Police then travelled to another village to arrest one of the organisers. When they couldn’t find him, they arrested his wife, who was reportedly eight months pregnant at the time.

An email received from local activists alleges that Edison Kendi was among those beaten by the police, although no further details are given. An update the following day states that all but two of those arrested were released at 22:00 the same evening. However Kendi was held in Serui City Police Headquarters together with Yan Piet Maniamboi, where the two men were charged with treason and incitement.

Several videos were posted on Youtube on 20 November of the two men still in police detention (where prisoners are often believed to face a greater risk of ill-treatment than in prison). The author claims at that time the status of their detention was still unclear. A Facebook update posted by West Papua Media alerts on 27 August alleges that they were only being fed once a day on many days, and their families were not being permitted to bring food or drink. As a result, two of the four political prisoners in Serui at that time were suffering from stomach complaints.  Local human rights defenders who visited the two men said that they were ill due to the prison conditions and the torture they have suffered.

According to a report dated 17 November, received from an activist in Serui who had reportedly inverviewed Kendi, the 11-year-old child of Kendi had been being intimidated by intelligence officers since his father’s arrest. He has also reportedly been asked to stop attending his junior school, with no clear explanation from the school. Edison Kendi has also stated that since his arrest, his 11-year-old son has been intimidated by an intelligence agent named Rian who has frequently visited the family house to ask questions about his father. He was so scared he moved to a different village, only to be followed by the same agent, threatening that his father would be kept in prison for life or be killed.

Local human rights defenders who have visited the two men say that they are ill due to the prison conditions and the torture they have suffered. Edison Kendi in particular was reportedly badly beaten by the police Mobile Brigade (Brimob) when he was arrested. Kendi stated that his repeated applications for treatment outside prison were denied by the Public Prosecutor, Matius Matulesi, while West Papua Media reports that Matulesi had also allegedly prevented Kendi from attending the funeral of his father, a basic right that other Indonesian prisoners have routinely been afforded. Kendi was reportedly denied permission to visit his wife who is ill and young daughter who has contracted malaria.

On 28 February 2013, the Serui District Court rejected the demurrer presented by the Defence Counsel for Edison Kendi and Yan Piet Maniamboi, which argued that the indictment was inaccurate, unclear and incomplete. At a hearing on 9 April 2013, Matulesi had allegedly threatened two of the witnesses who testified about their mistreatment in detention. While the hearing on 23 April was scheduled for the testimony of two police officers, their absence resulted in Prosecutor Matulesi calling on ex political-prisoner Jon Nuntian, and Jamal Omrik Manitori. Local human rights sources report that Manitori was pressured by Matulesi to sign a letter agreeing to be a witness to the case. Manitori refused to agree and did not testify against Kendi and Maniamboi. However, local sources report that statements allegedly made by Jon Nuntian against Kendi and Maniamboi as recorded in police minutes of the case were read out by the Prosecutor. The Prosecutor reportedly declared that the examination of witnesses was complete though there were four other witnesses who were not present as they were out of town.