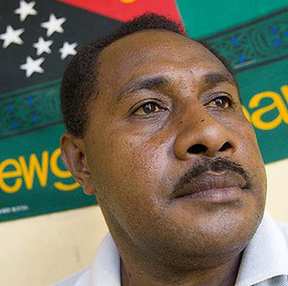 Edison Waromi, born in 1964, is a lawyer and the Executive President of the West Papua National Authority (Otoritas Nasional Papua Barat), an organisation which campaigns for Papuan independence. Mr Waromi was first arrested in October 2003, in connection with his leadership role in the commemoration of the West Melanesia State’s fourteenth anniversary (see below). On 7 July 2011, he participated in the drafting of the Papuan Peace Declaration, as part of the “Dialog Jakarta-Papua” process advocated by Dr Muridan Widjojo and Dr Neles Tebay.

On 19 October 2011, according to the AHRC and the Jakarta Globe, Mr Waromi was elected as the Prime Minister of the newly-declared West Papuan Federal State. At 14:00 local time, Mr Yaboisembut, elected president of the West Papuan Federal State, read out a political declaration about the self-determination of Papuan people. He reportedly said that the objective of the Congress was not to destroy the Republic of Indonesia, but to discuss the basic rights of the indigenous Papuan people.

According to AHRC and the Jakarta Globe, Mr Waromi was arrested with his wife and child, along with four of the other Congress organisers; Forkorus Yaboisembut, August Makbrawen Sananay Kraar, Dominikus Sorabut, and Gat Wenda. On 20 October, Selpius Bobii, Chairman of the Congress, surrendered to the police. Gat Wenda was charged with Emergency Law 12 of 1951 for possession of a sharp weapon. The remaining five men were charged with treason (article 106 of the Indonesian Penal Code), conspiracy (article 110), and public incitement to violence against the authorities (article 160).

Gat Wenda was tried, sentenced to five months imprisonment and then released, as he had already served this time in detenion. Mr Waromi and the other four defendants were tried at the State Court in Abepura over 13 sessions, starting on 30 January 2012. On 16 March 2012, the four men were found guilty and sentenced to three years’ imprisonment – two years less than the five years requested by the Public Prosecutor. The defendants’ legal team and the Public prosecutor both appealed the decision on 4 April and the case was referred to the High Court. On 11 May 2012, the appeal was rejected by the High Court, which decision was again appealed by the defendants’ legal team, who took the case to the Supreme Court. On 24 July 2012, the Supreme Court issued Decision MA No.1029K/PD/2012 rejecting the appeal which had been made on behalf of the five defendants.

Before his arrest in 2011, Edison Waromi had already spent much of the last two decades in jail for his political beliefs. As his friend Herman Wanggai has recounted in an internet blog, Mr Waromi was first jailed in 1989 for twelve years, then in 2001 for six months, then again for two years in 2002, before being arrested once again at the Third Papuan Congress.

The 2002 arrest was due to an action to raise the 14-star flag of the West Melanesian State. Edison Waromi was arrested together with Herman Wanggai and Yordan Ick. An article in the Jakarta Post newspaper explains that the event, which took place on 14 December 2002 at the Cenderawasih University Compound, was in commemoration of the fourteenth anniversary of the day when Thom Wanggai (Herman Wanggai’s uncle) proclaimed West Melanesia as an independent state. Edison Waromi and Yordan Ick had both been present that day in 1988; it was the occasion of their first arrest and subsequent imprisonment.

Edison Waromi was charged with treason under articles 106 and 110 of the Indonesian Criminal Code. Articles in the local Cenderawasih Pos newspaper followed the progress of their trial. One article explains that the three defendants presented demurrers in which they affirmed their belief in the West Melanesian State and presented the whole process of their arrests, detention and trial as a violation of their human rights. Edison Waromi‘s demurrer bore the title “Melanesians in a Malay court.”

On 9 October 2003, Edison Waromi and Herman Wanggai were both sentenced to two years in prison, the full amount that the prosecution had demanded. A Cenderawasih Pos article quotes Edison Waromi as he received his sentence as saying “It is not the first time I received a sentence like this, and it proves that the Papuan problem cannot be resolved only by means of law and justice. Just as Nelson Mandela struggled for his country, and as with East Timor, we will keep resisting whatever the risks.”

Sometime after their sentencing, the three men went missing from the Abepura jail. The Cenderawasih Pos reports that Edison Waromi was re-arrested in Abepura on 1 December 2003 and served the rest of his sentence. Herman Wanggai at that time had travelled to Sorong, but it is not clear whether he then returned to prison. Yordan Ick had already served all ofhis 10 month sentence.

Herman Wanggai, “West Papua. Trial on Monday 30th of January 2012. Where is our Freedom and Justice?,” January 2012 http://hermanwainggai.blogspot.com/2012/01/west-papua-where-is-our-freedom-and.html