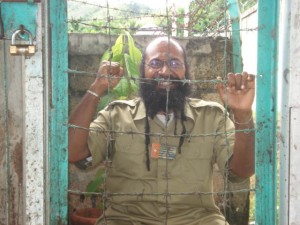 Sentenced to 15 years’ imprisonment for the act of simply raising a flag, Filep Karma is undoubtedly the best-known political prisoner in West Papua. His release on 19 November 2015 was widely celebrated among Papuan civil society.

The son of a prominent local politician, originally from Biak island, Filep Karma studied political science in Java before working as a civil servant in Papua.

Mr Karma’s first conviction for treason occurred in the euphoric weeks following the fall of Suharto’s regime, as people all over Indonesia rose up to seize the new possibilities to express their aspirations and seek to redress the injustices of the dictatorship. Human Rights Watch has chronicled the demonstrations which broke out across Papua, when people were emboldened by a letter from a group of US Congress members which asked President Habibie to review the status of West Papua and East Timor. On 2 July 1998 Mr Karma led a demonstration in Biak where the Morning Star Flag was raised on a water tower near the harbour. Despite a confrontation with the police that same day, the demonstrators managed to defend the flag and the port for four more days.

The Morning Star flag is a symbol of Papuan identity and seen as treasonous by the Indonesian state. While it was allowed under Indonesia’s 2001 Special Autonomy laws relating to the governance of Papua, it was subsequently banned again by Presidential Regulation 77/2007.

Early on the morning of 6 July, the military took control of Biak Harbour. Eben Kirksey, an American anthropologist who happened to be in Biak at the time, reported that Filep Karma was shot in each leg, but survived. However he also recorded eye-witnesses telling of trucks laden with the dead and dying, and how local investigators claimed that 139 bodies were loaded onto two navy ships and dumped at sea. Thirty-two bodies were later washed up along the coast.

Andreas Harsono, a consultant for Human Rights Watch has recorded that 150 people were arrested that day, 19 of whom were brought to trial, including Filep Karma. On 25 January 1999 Mr Karma was sentenced to six-and-a-half years in prison, but he later appealed and was released after spending 18 months in detention. An article in local Papuan newspaper the Cenderawasih Pos confirmed that the charge was treason under article 106 of the Indonesian Criminal Code, and mentioned that around 2000 sympathisers were present at his trial.

After his release, according to Andreas Harsono, Mr Karma continued to work for the government, training new civil servants. On 1 December 2004, the day many Papuans regard as the anniversary of the granting of independence by the Dutch, Mr Karma was once again arrested for organising a flag-raising. In their report “Protest and Punishment – Political Prisoners in West Papua,” Human Rights Watch noted that Mr Karma had sent a letter to local police informing them of the intention to hold a celebration on Trikora Field, Abepura, that day. The event consisted of speeches, prayers and dancing (Mr Karma’s speech that day can be viewed on Youtube), during which the Morning Star flag was raised. Clashes broke out as police tried to take down the flag, and police fired into the crowd.

Mr Karma, together with Yusak Pakage was arrested the next day. National newspaper Tempo reported that as a protest against his detention, Mr Karma began a hunger strike, and also tied a white cloth over his mouth, refusing to speak.

During the trial process, according to Human Rights Watch, both Filep Karma and Yusak Pakage challenged the court’s authority to prosecute them, claiming they were West Papuan citizens, not Indonesians. The defence also protested the impartiality of one of the judges, after a series of inflammatory remarks. The judge in question had apparently told the police to “Smash in the head of Filep if he’s naughty” and even said “You be quiet, you want to die do you?” to a female pro-Karma protester as he punched and kicked her. The defence lawyers were also subjected to intimidation; a severed dog’s head was left outside the Jayapura Legal Aid (LBH) office with a threatening note addressing the two defence lawyers by name.

Once again there were huge public demonstrations in support of the two defendants, both inside and outside the courtroom. The force of this was felt on 10 May, as angry supporters protested the prosecution’s demand that the two men be sentenced to five years in prison. The Human Rights Watch report indicates that courtroom windows and vehicles were smashed, and the crowd tried to blockade the vehicle containing the two defendants so that Mr Karma could address the crowd directly. However, the police fought back and at least thirteen people, including two policemen, were injured in the clashes that followed. The Head of the Jayapura police and ten others were later demoted because of human rights violations that occurred during these protests, but subsequent hearings were protected by 300 police officers surrounding the court.

On 26 May 2005, Filep Karma and Yusak Pakage were found guilty of treason. Mr Karma’s sentence was 15 years, three times longer than the prosecution’s original demand that had triggered the angry protests two weeks previously. Defending the heavy sentences, the judges said there were no factors which could mitigate the sentences. Appeals to the Court of Appeals and Supreme Court were unsuccessful.

Mr Karma’s state of health in prison has been a source of concern since at least August 2009, when he was brought to the Dok II Hospital in Jayapura for kidney problems, according to the Solidarity Organization for Victims of Human Rights Abuses in Papua (Solidaritas Korban Pelanggaran HAM di Papua, SKPHP). The hospital recommended that he be transferred to Cikini Hospital in Jakarta to see a specialist in urological surgery, but the prison refused to pay for this treatment, although it is their legal obligation to do so. Instead, members of SKPHP in Jayapura and activists in Manokwari went out on the streets to raise money for the treatment. This way they were able to pay the costs of flights and accommodation for members of his family who supported him during the trip. Filep Karma was in Jakarta from 19 to 31 July 2010. The RP 60.8 million medical bill was paid for mostly by international NGOs (94%), and the remainder by the Provincial government of Papua.

As supporters mobilised to raise funds for his treatment, Mr Karma worked to draw attention to the plight of other political prisoners, especially Ferdinand Pakage who needed treatment for an eye injury after he was beaten by a prison guard. Local newspaper Tabloid Jubi reported Mr Karma as saying that he was holding back from leaving to Jakarta for treatment in order to leave together with Ferdinand Pakage, but that in the end he was forced to leave alone. A message from the prison reportedly received by West Papua Media even indicated that Mr Karma started a hunger strike on 5 October 2010, demanding adequate medical attention for Ferdinand Pakage, although no reports were received about how long this protest lasted.

Mr Karma continued to experience health problems until 2012, when local doctors recommended he should travel once again to Jakarta for a colonoscopy. A press release from his family published by West Papua Media stated that once again the Indonesian state refused to pay for this treatment. Once again Mr Karma’s supporters across Papua and internationally had to raise money for the treatment.

On 3 December 2010 Mr Karma was moved out of Abepura prison to the Papuan Police Headquarters. This was after a disturbance broke out in the prison, when prisoners learnt that Miron Wetipo, an inmate who had recently escaped, had been shot dead. Mr Karma, along with another political prisoner Buchtar Tabuni and three others were moved to the police station and accused of being the ringleaders. However, BUK Papua has reported that the two men were merely trying to negotiate a dialogue with the prison chief to investigate the shooting, and trying to prevent the prisoners from destroying the prison. Reports in local newspapers Tabloid Jubi and Bintang Papua reveal that the five men were charged with criminal damage under article 170 of the criminal code, and also that for some days after they were moved their lawyer was not able to visit them. Mr Karma once again refused food for a period in protest. They remained in the police station until 7 March 2011.

In 2011 Mr Karma was one of several Papuan political prisoners who was offered remission as part of Indonesia’s celebration of its independence day on 17 August. He refused this offer, saying that he would only accept unconditional freedom, accompanied by an apology to the Papuan people who have been killed, or oppressed, or who have had their land taken from them. A video of this refusal can be viewed on West Papua Media Alerts.

Because of the extremely long sentence he received for peacefully expressing his views, and possibly because of his own determination to stay firm with his beliefs even while behind bars, Filep Karma‘s case has attracted support from many international organisations and has also become a focus for campaigns against Indonesia’s repressive use of the treason laws. Human Rights Watch has repeatedly chronicled his case, and Amnesty International has described him as a prisoner of conscience since at least February 2005, while consistently campaigning for his release. In August 2011, 26 US Congressmen signed a letter to Indonesian President Susilo Bambang Yudhoyono requesting his release. A United Nations body, the Working Group on Arbitrary Detention has also issued a high-level opinion on Mr Karma’s case, claiming his detention represents a breach of articles 9, 10, 11 19 and 20 of the Universal Declaration of Human Rights, and demanding that he be immediately released and compensated.

There were reports of Filep Karma‘s family being targeted and physically attacked. Andrefina Karma, Filep’s daughter was allegedly deliberately hit by a motorcycle outside her house in Jayapura on 6 June 2013. The motorcyclist had reportedly been waiting around and monitoring the house when Andrefina was on her way back home from work, when he crashed into her when she entered the alley to her house. He had allegedly attempted to approach her after the crash, but left hurriedly when concerned neighbours came to the scene.

On 19 November 2015, Mr Karma was finally released via a special decade remission. While Mr Karma has repeatedly rejected clemency and remissions, due to the implicit admission of guilt to which he does not subscribe, in the event he was not given the choice to refuse this remission, but instead simply removed from the prison. Mr Karma was accompanied during his release by his lawyer Ms Olga Hamadi, of KontraS Papua.

Eben Kirksey, “What is Indonesia Trying to Hide in West Papua?” 17 October 2012, http://ebenkirksey.blogspot.fr/2012/10/what-is-indonesia-trying-to-hide-in.html