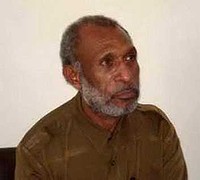 Forkorus Yaboisembut, born in 1955, is the chairman of the Papuan Customary Council (Dewan Adat Papua). On 7 July 2011, Mr Yaboisembut participated in the drafting of the Papuan Peace Declaration, as part of the ‘Dialog Jakarta-Papua’ process advocated by Dr Muridan Widjojo and Dr Neles Tebay. He then participated in the organisation of the October 2011 Third Papuan People’s Congress and played a key role in the Congress, which lead to his arrest under treason charges.

On 19 October 2011, according to the AHRC and the Jakarta Globe, Mr Yaboisembut was elected as the president of the newly-declared West Papuan Federal State. Around 14:00 local time, he read out a political declaration about the self-determination of the Papuan people. He reportedly said that the objective of the Congress was not to destroy the Republic of Indonesia, but to discuss the basic rights of the indigenous Papuan people.

Mr Yaboisembut was arrested along with four of the other Congress organisers; Edison Waromi, August Makbrawen Sananay Kraar, Dominikus Sorabut, and Gat Wenda. On 20 October, Selpius Bobii, Chairman of the Congress, surrendered to the police. Gat Wenda was charged with Emergency Law 12 of 1951 for possession of a sharp weapon. The remaining five men were charged with treason (article 106 of the Indonesian Penal Code), conspiracy (article 110), and public incitement to violence against the authorities (article 160).

Gat Wenda was tried, sentenced to five months imprisonment and then released, as he had already served this time in detention. Mr Yaboisembut and the other four defendants were tried at the State Court in Abepura over 13 sessions, starting on 30 January 2012. On 16 March 2012, the four men were found guilty and sentenced to three years’ imprisonment – two years less than the five years requested by the Public Prosecutor. The defendants’ legal team and the Public prosecutor both appealed the decision on 4 April and the case was referred to the High Court. On 11 May 2012, the appeal was rejected by the High Court, which decision was again appealed by the defendants’ legal team, who took the case to the Supreme Court. On 24 July 2012, the Supreme Court issued Decision MA No.1029K/PD/2012 rejecting the appeal which had been made on behalf of the five defendants.

Mr Yaboisembut’s activities as chairman of the Papuan Indigenous Council have frequently brought him to the attention of local police in the past. According to Human Rights Watch (August 2011), Mr Yaboisembut was already under tight surveillance by Indonesia’s Special Forces (Komando Pasukan Khusus, known locally as Kopassus) before the events for which he was arrested took place. In August 2008, he was questioned by the police over the raising of the ‘Morning Star’ flag, a symbol of Papuan identity, in a demonstration. He subsequently received death threats and hate messages from unidentified sources.