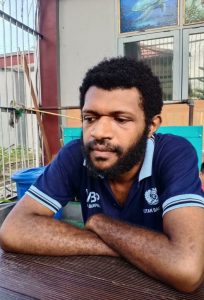 He was arrested on 11 September 2019 by Papua Regional Police without an arrest warrant.