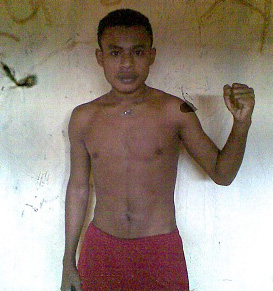 Jamal Omrik Manitori was reportedly arrested on 3 July 2012 after being placed on the police wanted list for allegedly participating in training exercises of the National Liberation Army/ Free Papua Movement (Tentara Pembebasan Nasional/Organisasi Papua Merdeka, TPN/OPM) on Yapen Island. He is being held in Serui prison charged with treason under Article 106 of the Indonesian Criminal Code, however as yet no information has been made available regarding the circumstances of the arrest nor the specific allegations against him.

Members of the Indonesian Special Forces Command (Kopassus) raided what they claimed was a TPN/OPM training camp on May 29 2012, reportedly burning down houses and arresting Jon Nuntian. The TPN is an armed guerrila organisation which has been fighting the Indonesian presence in West Papua for several decades, although it is not known whether or not either Mr Nuntian or Mr Manitori is a member of this organisation.

As of April 2013, there were no reports confirming whether Mr Manitori’s case had come to court. In March 2013, Papuans Behind Bars received information that Jon Nuntian had been released. It is not known whether he had faced trial or not.