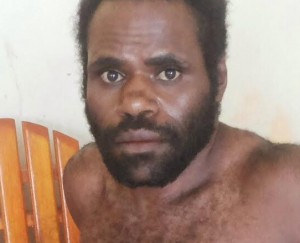 On 9 December 2014, Murib travelled on his motorcycle from Lanny Jaya heading towards Wamena to hand over the pistol belonging to his deceased relative to DPRD authorities. On his way to Wamena, he came across a police roadblock outside Pirime District police station. Fearing that he would appear suspicious as he was carrying a pistol, Murib got off his motorcycle, raised his hands and told police officers that he was carrying a pistol and would like to hand it over to authorities. Upon hearing his admission, police immediately started beating Murib and dragged him into the police station.

Five Brimob officers proceeded to torture him for several hours. After shaving his hair off with a bayonet blade, Brimob officers slashed his head and rubbed the bleeding wound with chilli paste. Following this, scalding water was splashed onto the wound five times. His thighs were slashed four times with bayonet blades. The tip of his left toe, and parts of both his ears were sliced off. He was doused with scalding water resulting in serious burn injuries. He was also beaten in the back and ribs with rifle guns.

Under tight security, Murib was then sent to Wamena General Hospital to undergo medical treatment. While receiving treatment in Wamena, his hands were cuffed, and remained so for more than two months. After receiving treatment, he was taken to Jayawijaya Regional police station to be detained in a holding cell.

On 16 February 2015, Murib was taken to the Papuan Police Headquarters in Jayapura. He was then allowed to wear clothes and his handcuffs were released. After being detained for 40 further days, he was taken back to Wamena. On 27 April Murib’s trial began, but he was too ill to attend the hearing. Doctors in Wamena who examined Murib observed that he was suffering from trauma.

Following his attempts to locate Murib, Wenda was first arrested in February 2015. He was tortured in detention. The following day, Wenda was taken to Papuan Police Headquarters in Jayapura for further interrogation. He was taken back to Wamena and released shortly afterwards. However on 17 March 2015, he was arrested again when Murib, while in detention and under torture, admitted that Wenda too knew about the pistol.

Both men are currently awaiting trial while being detained at Wamena prison. Lawyers from AIDP have reported that Kamori Murib and Kelpis Wenda both face charges of possession of firearms under the Emergency Law 12/1951.

During a court hearing on 27 April 2015, Murib was visibly unwell and was still experiencing pains as a result of the torture he suffered on arrest on 9 December 2014. As a result, the court hearing was postponed. However, during the following court hearing on 7 May, Murib was still feeling unwell due to the lack of adequate medical care provided to him. Defense lawyers from AlDP and the Papua Legal Aid Institute (Lembaga Bantuan Hukum, LBH Papua) have pressed for Murib to obtain a proper medical consultation to get a diagnosis of his illness.