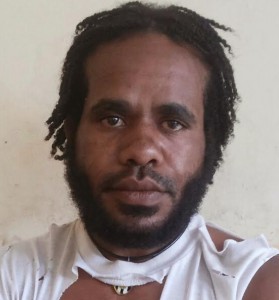 On 9 December 2014, Murib travelled on his motorcycle from Lanny Jaya heading towards Wamena to hand over the pistol belonging to his deceased relative to DPRD authorities. On his way to Wamena, he came across a police roadblock outside Pirime District police station. Fearing that he would appear suspicious as he was carrying a pistol, Murib got off his motorcycle, raised his hands and told police officers that he was carrying a pistol and would like to hand it over to authorities. Upon hearing his admission, police immediately started beating Murib and dragged him into the police station. Murib was tortured for several hours. Under tight security, Murib was then sent to Wamena General Hospital to undergo medical treatment. While receiving treatment in Wamena, his hands were cuffed, and remained so for more than two months. After receiving treatment, he was taken to Jayawijaya Regional police station to be detained in a holding cell.

Following his attempts to locate Murib, Wenda was first arrested in February 2015. On arrest, he was forced into a vehicle by being dragged along the ground and beaten with rifle butts on his upper abdomen. In detention, he suffered further torture. Two seven centimetre nails were hammered into his left forearms with wooden planks until they reached the bone. He lost two teeth and suffered facial wounds as a result of being beaten on the face with rifle butts. His left big toe was broken and he was beaten on the back with a chair. He was also beaten with wooden planks.

The following day, Wenda was taken to Papuan Police Headquarters in Jayapura for further interrogation. He was taken back to Wamena and released shortly afterwards. However on 17 March 2015, he was arrested again when Murib, while in detention and under torture, admitted that Wenda too knew about the pistol.

Lawyers from AlDP reported that on 20 August, Kamori Murib and Kelpis Wenda were sentenced to three years’ imprisonment for possessing a firearm under charges of Emergency Law 12/1951. The Public Prosecutor had previously called for a four-year sentence each for the two men. On 23 August, Kelpis Wenda reportedly escaped Wamena prison during a mass prison break.