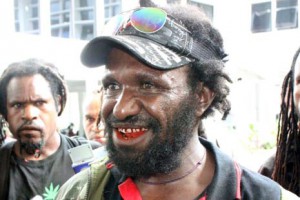 The late Mako Tabuni was a leading member of the West Papuan National Committee (Komite Nasional Papua Barat, KNPB), an organisation which notably organises mass demonstrations calling for a referendum on West Papua’s future. Mr Tabuni was killed by police gunmen on 14 June 2012, but prior to that he had already spent time in prison, having been charged with treason but found guilty of incitement.

The first large demonstrations organised by the KNPB took place in 2008. Indonesian elections were to be held in 2009, and so the KNPB organised a demonstration on March 10 of that year, demanding a referendum on West Papuan independence instead of participating in Indonesian elections. Although there were no arrests at the demonstration, some weeks later on 3 April, Mako Tabuni was arrested along with Serafin Diaz as they descended from the passenger ship KM Labobar in Jayapura port. Local newspaper Cenderawasih Pos carried a report of the arrest, mentioning that in a press conference that day that the police had linked the arrests to the 10 March demonstration.

One hour later, according to a report by the Alliance for Democracy in Papua (Aliansi Demokrasi untuk Papua, ALDP), police conducted a raid on the compound of the Papuan Customary Council (Dewan Adat Papua, DAP). Fifteen people were arrested. The ALDP report explains that since they were evicted from the area around Theys Eluay’s grave, young KNPB activists often gathered at the DAP compound. Fourteen of the men and women arrested were released the next day, but Yance Mote was held in prison and tried alongside Mako Tabuni and Serafin Diaz. All three were charged with articles 106 and 160 of the Indonesian criminal code, which refer to treason and incitement.

Court documents made available by the Supreme Court give an outline of the case against the three men as it progressed through the different levels of the court system. Serafin Diaz and Yance Mote were accused of having made speeches at the demonstration. The principal allegation against Mako Tabuni was that he had hired a taxi and installed a loudspeaker on its roof which was used to address the crowds. All three were eventually cleared of the treason charges, but sentenced to 18 months in prison for incitement.

A touching obituary to Mako Tabuni, first published by Berita Satu, includes several anecdotes taken from a previous interview with Mr Tabuni. In the interview he had recounted various incidents in his life, revealing how incarceration impacted his life even in childhood. Growing up in the mountains near Wamena, he recalled how his father carried the stigma of a troublemaker and would be arrested in August each year as part of security measures around Indonesian Independence day on 17 August. His son would have to visit and bring food to the military barracks where he was held. Mako Tabuni saw the inside of a prison cell for the first time himself when he moved to Jayapura in 1999, where he was arrested by Kopassus special forces and accused of consorting with TPN-OPM leader Matius Wenda. That time he was not held long, but was then arrested again in Timika in 2007, again accused of being a TPN member. He was charged with treason and held for seven months, but then released without the case ever reaching trial.

According to the same Berita Satu report, Mr Tabuni was released on parole on 28 January 2010 while an appeal was still pending in the Supreme Court, as the court had not issued an order for his continued detention. His lawyer, Gustaf Kawer, reportedly advised him to be careful and let other people be in the spotlight, but Mako Tabuni didn’t want to stop his activities.

On 14 June 2012, as he was buying betel nut in Waena near Jayapura, Mako Tabuni was shot dead by police, believed to be from the Special Detachment (Densus) 88 anti-terror squad, although this has not been confirmed by police. As this profile focuses on Mr Tabuni’s detention, the events surrounding his assassination are not discussed here. However several Papuan groups have collected witness statements and tried to piece together what happened that day. For example a detailed chronology by a coalition of Papuan human rights groups has been published by Warta Papua Barat.

On hearing of Mako Tabuni‘s death, high-profile political prisoner Filep Karma, who had been imprisoned together with Mr Tabuni in Abepura prison, reportedly said to a family member: “It feels as if my bones are broken, I have no strength, I have no spirit, no will to eat.”