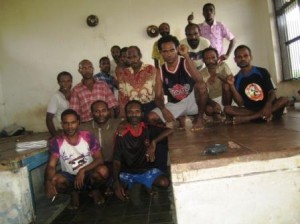 Marten Anouw and 14 others were arrested in Nabire early in the morning 6 April 2009 in connection with a demonstration that was planned for later that day. An account of their arrest published by the Papuan branch of the Commission for the Disappeared and Victims of Violence (Komisi untuk Orang Hilang dan Korban Tindak Kekerasan, KontraS), explains that the West Papuan National Committee (Komite Nasional Papua Barat, KNPB) had already organised one peaceful demonstration on 3 April. After this they opened a temporary base in a nearby park, Taman Bunga Bangsa, from which they planned to organise another demonstration on 6 April. The aims of the demonstrations were to reject Papua’s special autonomy status, call for an election boycott and support the launch of International Lawyers for West Papua.

KontraS Papua reported that at around 05:00 local time on 6 April, police entered the KNPB basecamp firing shots and proceeded to arrest 15 people. Mr Anouw was woken suddenly when he heard the gunshots, and during his arrest he was beaten around the head and spine with a rubber baton and rattan cane until he was seriously wounded and his face covered with blood. The 15 accused were taken to Nabire police headquarters where they were again beaten with rubber batons, rattan canes and gun barrels, and kicked with jack boots. The accused received no medical attention at the police station and were interrogated despite being in pain from the beatings. They were also not advised of their right to a lawyer and were ordered to sign the police investigation report (Berita Acara Pemeriksaan) without having been allowed to read it first.

It is unclear as to whether all of the 15 men arrested were even participating in the KNPB’s mobilisations. The KontraS Papua report claims that only five of them had joined the demonstration on 3 April. The incident took place on a Sunday morning in a public place where people had been drinking the previous evening, according to local newspaper Tabloid Jubi, and one defendant said that having fallen asleep in the park he woke to hear gunshots, having no knowledge of what was happening.

Mr Anouw and his co-accused were charged with conspiracy to commit treason under articles 106 and 110 of the penal code. Their defence counsel lodged an objection on 25 June 2009, highlighting the defendants’ rights to freedom of expression and freedom of assembly, and highlighted the fact that the KNPB had raised legitimate issues through a peaceful demonstration, which should not be treated as treasonous. The legal team also claimed that the arrests did not conform to legal procedures, citing the aforementioned irregularities and a lack of access to translators, despite the fact that 12 of the 15 were not fluent in the Indonesian language. On 14 July 2009, the judges presiding over this case rejected the objection raised by the defence.

On 14 September 2009 after 160 days in prison, the judges acquitted Mr Anouw and his co-defendants of charges of conspiracy to commit treason and released them, according to a press release by the Civil Society Coalition for Peace and Justice (Koalisi Masyarakat Sipil untuk Perdamaian dan Keadilan). However, as at February 2012, lawyers for the defendants stated that following an appeal to the Supreme Court the verdict had been changed to guilty with a sentence of three years imprisonment. The lawyers have not yet received detailed information regarding the decision.

Information provided by the defendant’s legal team, via TAPOL