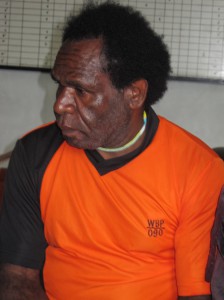 Obeth Kosay was arrested on 20 November 2010 on his way to the funeral of a relative in Piramid village near Bokondini in the Central Highlands of West Papua. The relative had fallen ill after being tortured by police a few months earlier and had subsequently died. According to local newspaper Tabloid Jubi, a group of nine men, including Mr Kosay, were arrested on their way to the funeral, because they had allegedly raised the Morning Star flag in Yalengga village before they left.

According to a court document (see below), Mr Kosay was arrested along with Toebaga Kilunga, Meki Tabuni, Wombi Tabuni, Miki Meaga, Pastor Ali Jikwa, Oskar Hilago, Meki Elosak and Peres Tabuni. Only information relating to the cases of the first six of these men has been made available so far.

Although the case was widely reported when it happened, due to it coinciding with a visit of the Indonesian President to Papua, there are no further media or NGO reports about subsequent charges, trial or imprisonment of the suspects. However, the decision of Wamena District Court against six of the nine people arrested (Obeth Kosay, Teobaga Kilungga, Wombi Tabuni, Wiki Meaga, Ali Jikwa and Meki Tabuni) has been published by the Supreme Court, which upheld the verdict on appeal. The document reveals that the prosecution accused the nine men of bringing a Morning Star flag mounted on a pole to Yalengga so that the deceased relative (named as Marthen Wenda) could be buried next to the Papuan flag. They were arrested before they reached Mr Wenda’s residence, where mourning was underway. A brief reference is made to the flag having been planted in the ground at the moment of their arrest, and several letters were apparently found by police referring to a ‘Tim 1000′ of delegates from the OPM assigned to meet with the Indonesian president.

The trial records of the other three men, Oskar Hilago, Meki Elosak and Peres Tabuni, have not been made available.

A report in the Cenderawasih Pos claimed that Pastor Ali Yikwa and Toebaga Kilungga were among 42 prisoners who reportedly escaped Wamena Prison in a mass breakout on 4 June 2012. By February 2013, information from Papuan lawyers in contact with Wamena prison authorities confirmed that Obeth Kosay, Oskar Hilago, Meki Elosak and Wiki Meaga were still in prison, whereas Peres Tabuni, Meki Tabuni and Wombi Tabuni were no longer in prison. Whether they were released or escaped in June 2012 is unknown.