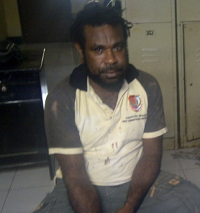 During his arrest plainclothes police (note: Aparat kepolisian berpakain preman) tortured Alua, handcuffing, and then beating, kicking and beating him with their pistols. Following this ill-treatment, he was transferred to investigators who interrogated him regarding a KNPB planned rally on 23 October 2012. During his detention, Alua was also reportedly forced to confess to preparation and possession of bomb-making materials.

The trial of the two activists began in 2013, and in March a lawyer for the two activists stated that the indictments were excessive, appealing to the judge for their release given the absence of any strong evidence. The lawyer’s submission was rejected.