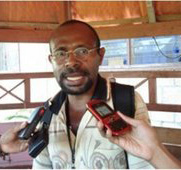 Selpius Bobii, born in 1979, is Chairman of the United Front of West Papuan People’s Struggle, Front Eknas Pepera PB. As a student, he was first arrested in 2006 following his involvement in protests against the US mining company Freeport-McMoRan (see below). On 7 July 2011, he was involved in drafting the Papuan Peace Declaration, as part of the ‘Dialog Jakarta-Papua’ process advocated by Dr Muridan Widjojo and Dr Neles Tebay. Mr Bobii was also the main organiser and Chairman of the October 2011 Third Papuan People’s Congress, leading to his arrest under treason charges.

According to local newspaper Bintang Papua, Mr Bobii said that the Congress was an opportunity for Papuans “to convey their opinions about what they feel.” He had officially requested the Indonesian government to participate and be represented in the Congress by Djoko Suyanto, Minister-Coordinator for Political, Legal and Security Affairs. However, in the event, the Minister-Coordinator declined to attend.

On 19 October 2011, around 14:00 local time, a political declaration about the self-determination of Papuan people was read out by Mr Forkorus Yaboisembut and Mr Edison Waromi, who had just been elected as political leaders of what was declared to be the West Papuan Federal State. At this point, according to a report by local NGO Justice, Peace and Integrity, (Keadilan, Perdamaian and Keutuhan Ciptaan, KPKC), Mr Bobii declared “we want to return to the sovereignty which once existed,” and appealed to the central government “to draw up a programme of development to ensure that the people experience improvements in their living conditions.”

While Forkorus Yaboisembut, Edison Waromi, August Makbrawen Sananay Kraar, Dominikus Sorabut, and Gat Wenda were arrested on the spot, Human Rights Watch reported that Mr Bobii eluded the police but surrendered on 20 October 2011, accompanied by his lawyers and a Papuan journalist. All six were charged with treason (article 106 of the Indonesian Penal Code), conspiracy (article 110), and public incitement to violence against the authorities (article 160). They are currently detained in Jayapura Police Station, awaiting trial.

Before the Congress Selpius Bobii had already completed one term in prison. He was arrested after the disturbances which broke out in Abepura on 16 March 2006, in which four police and military personnel were killed. The clashes had started after a demonstration demanding the closure of the Freeport mine, and as the General Secretary of Front Pepera which had called the demo Mr Bobii was arrested and charged under article 160 of the Indonesian Criminal Code, for incitement.

According to the Ecumenical Council of Churches in Papua (Persekutuan Gereja-gereja di Papua), Mr Bobii’s arrest triggered violent clashes between the police forces and protestors. He was held in isolation from his family and other detainees, and denied access to lawyers and journalists. Mr Bobii was reportedly subjected to torture, as were the other 23 prisoners held in relation to these incidents. The Indonesian Working Group on the Advocacy Against Torture has reported that Mr Bobii was kicked, punched, slapped and beaten with a chair, causing a torn lower lip and injuries and bruises all over his body.

Several organisations, including Amnesty International and an Advocacy Team set up to follow that case, have criticised the unfair and intimidatory nature of the trial. Among the complaints were that the judges based their evidence on the initial interrogation reports of the prisoners which were obtained under torture, that police and intelligence agents were present in the trial, that the indictees were threatened with death if they did not confess, and that they were also beaten shortly before appearing in court for one of the sessions. On 26 July 2006 Mr Bobii was sentenced to six years imprisonment.

Advocacy team for the Abepura clash of 16 March 2006, “The report of the hearing of the case relating to the clash in Abepura on 16 March 2006 in the Abepura state court, ” 21 August 2006, http://www.faithbasednetworkonwestpapua.org/userfiles/files/FurtherReading/GFSR(1).pdf