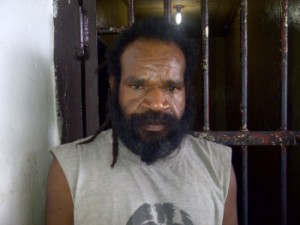 On 1 July 2012, the West Papua National Committee (Komite Nasional Papua Barat, KNPB) reported that two activists, Enos Itlay and Semi Sambom, had been detained by the police as they were returning from Wamena to Pugima village. They were brought to Wamena police headquarters for interrogation, and subsequently detained.

A press release published on a police website suggests that according to police, the two men were in possession of documents from the TPN/OPM, guerilla fighters for West Papuan independence. The police record includes a list of eighteen documents allegedly found on the men, nine of which explicitly refer to the TPN/OPM.

Papuans Behind Bars has seen copies of Mr Itlay and Mr Sambom’s interrogation reports made the day after their arrest, and also three weeks later in the presence of a legal advisor from KontraS Papua. Extensive evidence of police malpractice in similar cases means that we cannot have full confidence in the accounts presented in these documents, but they do provide interesting revelations about the police line of questioning.

During the first interrogation on 2 July, there was very little questioning about any TPN/OPM documents. Instead the questions focused on the detainees’ involvement with the KNPB (Enos Itlay is a KNPB Coordinator for Pugima village) and the Regional People’s Parliament (Parlemen Rakyat Daerah, PRD) of which Semi Sambom is a member for Yalimo. Both these organisations have a political orientation towards independence, but are not generally engaged in violent resistance against the state.

In a second interview on 21 July, Enos Itlay was asked about TPN documents. However, Semi Sambom was only asked about his involvement with the Regional People’s Parliament once more. It appears that the only documents found in Mr Sambom’s possession when he was arrested were an invitation to a PRD meeting and a letter from the KNPB to PRD members, requesting help with funds.

By November 2012, both Mr Sambom and Mr Itlay had been charged with treason under article 106 (and possibly 110) of the Indonesian Criminal Code and were awaiting trial. It was then reported in local newspaper Papua Pos that Enos Itlay had escaped from Wamena prison on 2 November 2012. In February 2013 information was received from the local Prosecutor’s office that Semi Sambom had also escaped, either in November or at some later date.