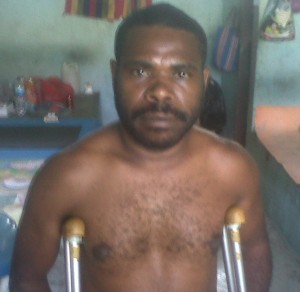 On 19 May 2013, 11 men were arrested by Oksibil police in Pegunungan Bintang regency during a police raid. The raid was conducted two hours after an arson attack by local residents on the Pegunungan Bintang regional police station. Residents reportedly attacked the police station in response to an earlier incident on 15 May 2013 when local resident Leo Klasikmabin was arbitrarily detained and tortured by police.

He was taken by police to the Oksibil Pegunungan Bintang Hospital for an emergency operation and was later transferred to Bhayangkara Jayapura Hospital where he received further treatment for five weeks. The medical treatment he received at Bhayangkara Jayapura Hospital appeared to be inadequate. An operation to remove metal rods that were inserted to fix his broken shin bone was postponed for six months by hospital doctors.  Following this, he was detained at the Papuan Provincial police station for another two months and one week. He was then sentenced to one year and seven months’ imprisonment to be served in Wamena prison.

During his detention in Wamena prison, police and local government authorities neglected to fulfill their responsibility to provide adequate medical treatment for Banal. Instead, his family was expected to pay for all medical costs. He was transferred to Abepura prison in February 2014, where he will carry out the rest of his sentence. Abepura prison authorities have reportedly stated that they would not meet any such medical costs as they see this as the responsibility of Banal’s family. Local activists reported that Banal’s family have returned to Oksibil in Pegunungan Bintang regency to raise funds for medication needed to heal the broken shin bone as well as the operation needed to remove the inserted metal rods, as they cannot afford the costs themselves. The livelihood of Banal’s wife and four children have been severely impacted since his detention.

Information from a local activist states that while some of the ten other men arrested were involved in the arson attack on the police post, others like Banal had no involvement in the incident. Due to the difficulty in obtaining information from Pegunungan Bintang, exact details remain unclear. Following their arrest, the ten men were detained in Pegunungan Bintang regional police station for two months before being charged with Article 170 for violence against persons or property. They were all sentenced to one year and seven months’ imprisonment and are currently serving their prison terms in Wamena prison.

Email received from local source, 9 May 2013