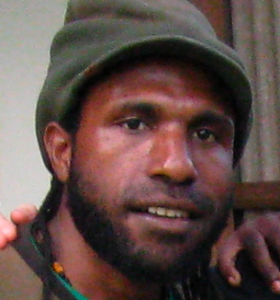 Victor Yeimo, born in 1983, is a pro-independence activist. He was the General Secretary of the West Papua National Committee (Komite Nasional Papua Barat, KNPB) until 2018. Currently he is the international spokesperson for KNPB and PRP (Papuan People’s Petition) that rejects the continuation of Special Autonomy in West Papua.

Mr Yeimo was arrested at 7.15pm when he was at a kiosk in Jayapura on 9 May 2021 without an arrest warrant. Mr Yeimo’s lawyers received arrest and detention warrants the following day at 6pm. This is in breach of Indonesian criminal procedure law which requires an arrest warrant to be presented at the time of arrest. The Indonesian Police said that  Mr Yeimo is arrested for alleged treason during heightened tensions in West Papua over his role in the 2019 West Papua Uprising.

In the first evening, Mr Yeimo was moved from Papua regional police’s detention center in Jayapura to the  Police’s Mobile Brigade Headquarters (Mako Brimob) in Abepura,  without any notice to his lawyers. Mako Brimob signifies higher security and more access restriction. Mr Yeimo’s lawyers have complained that this would make the family’s visit difficult.

Papua police chief stated that, “We are looking into all police reports, the process forwards will proceed based on each report, let him get old in prison.” Arrest warrant includes information of alleged crime committed and alleged laws violated. Scope of interrogation should stick to that information only. Arresting Mr Yeimo then digging his past acts through days of interrogation reflects intention to frame and arbitrarily detain Mr Yeimo.

Under Indonesian criminal procedure law, an arrestee may be not accompanied by their lawyer side by side during interrogation in relation to treason charges. Mr Yeimo was initially interrogated for allegations of treason so his lawyer was not by his side. In the end, however, Mr Yeimo was also charged with non-treason charges which required a lawyer to be present by his side.

Up to date there have been two interrogations. The first one was on the evening he was arrested. The second one was scheduled the following day, but Mr Yeimo was sick on May 10th, so the interrogation was postponed to May 11th. Despite protest by the lawyers, Mr Yeimo’s access to lawyer during interrogation was still restricted based on the treason charge procedure.

According to Mr Yeimo’s lawyers, Mr Yeimo complained about the cell he was placed in on the first night. It was the furthest away from the main entrance and it has bad air ventilation. He asked to be put in the cell closest to the main door. He was moved to the middle cell on May 11th. He is now put in the self confinement cell, where the sunlight is only available through ventilation at the top of his cell and from the main door. Mr Yeimo has been provided the access to clean water. Due to his medical condition, he needs to take medicines three times a day.

Until the time of the writing of this report, Mr Yeimo has been prevented from having access to his family.  No family member has been able to pay him a visit.

Police have not informed the lawyers when the next interrogation is. However, this does not mean that the interrogation is finished. It is likely that the process is only paused due to the Eid holidays. Papua police chief, on May 12th, stated that, “I have asked the investigators to not hurry in digging into each report, to connect each law violated by him.” He expects life imprisonment for Mr Yeimo.

We are concerned that additional charges would be added against Mr Yeimo when interrogation continues.

The KNPB emerged around 2008 as an organisation which organises mass demonstrations around West Papua, often to push for a referendum on West Papua’s political status, or to support the initiatives of the International Parliamentarians and International Lawyers for West Papua (IPWP and ILWP).

Several prominent figures in the KNPB were arrested after some demonstrations in the early days of the KNPB. Buchtar Tabuni was arrested on 3 December 2008 because of his role in organising a demonstration on 16 October that year, and Sebby Sambom was also arrested shortly afterwards. Later Mako Tabuni, Yance Mote and Serafin Diaz were arrested on 3 April 2009 in connection with a demonstration on 10 March. Although both demonstrations had gone peacefully, all those arrested were charged with treason and incitement (Articles 106 and 160 of the Indonesian Criminal Code). Buchtar Tabuni‘s case was the first to come to trial, and while he was found innocent of treason, he was convicted for incitement. This seems to have set a precedent, as the judge passed similar sentences in the other four cases.

Victor Yeimo was Deputy General Secretary of the KNPB at the time of his arrest. According to an article posted on the Papua Post website, Yeimo had been on the police wanted list since May 2009. A student group has reported that on 18 April his family home in Nabire was raided and three family members were arrested and interrogated overnight by police demanding to know his whereabouts. Finally on 21 October 2009 Yeimo was arrested in a hotel in Abepura by police conducting a sweeping operation, unconnected to any political activity.

Yeimo was prosecuted for his participation in the KNPB demonstration on March 2009. According to a report of the trial in Bintang Papua newspaper, he was accused of having cried out “Papua” to which the crowd replied “Merdeka!” (Freedom), “Special Autonomy,” to which the crowd shouted “No”, and “Referendum,” which was met with the response “Yes.”

Earlier allegations of Yeimo’s involvement in an attack on the Abepura city police station in April 2009 (reported on in an International Crisis Group report) appear to have been dropped rapidly after Mr Yeimo’s arrest.

Yeimo was charged with treason and incitement under Articles 106 and 160 of the Indonesian Criminal Code. If he was convicted of both treason and incitement, he would have faced a three-year prison sentence, but on 23 July 2010, he was found guilty of incitement rather than treason and was given a sentence of one year’s imprisonment minus time already spent in detention. In response, the Public Prosecutor submitted an appeal to indict Yeimo under Article 106 for treason, which would increase his total prison sentence to three years.

In commenting on the detention of Yeimo, Harry Maturbongs of KontraS Papua, reported in Tabloid Jubi, said: “Is it wrong if somebody says that the Act of Free Choice should be reviewed, that Special Autonomy has failed, and to ask that human rights in Papua be respected?”

As the KNPB has grown as a social movement across Papua, repression against its activists has also increased. Yeimo himself has stated to the Suara Papua website that 22 KNPB members were killed by security forces during 2012 and 55 were imprisoned.

On 1 December 2012, a day many Papuans commemorate as the anniversary of the first raising of their national flag in 1961, the KNPB attempted to hold a demonstration marching from the site of the assassination of Mako Tabuni to the grave of Theys Eluay, a Papuan leader assassinated by Indonesian security forces in 2001. Police stopped the demonstration and arrested Yeimo, who was soon released. Al Jazeera journalists travelling with Mr Yeimo at the time documented some of these events, and their documentary “Goodbye Indonesia” gives an insight into the daily tension KNPB leaders face.

Yeimo was arrested again on13 May 2013, when police stopped a group of demonstrators in Jayapura from carrying out a march demanding government accountability in the wake of the deaths, arrests and injuries from the commemorative events of 1 May 2013. Majalah Selangkah reported that Yeimo and three other activists, Yongky Ulimpa, Ely Kobak and Marthen Manggaprouw were arrested when Yeimo attempted to negotiate with the police to allow the march to proceed. A report from an activist present at the demonstration states that all four were severely beaten upon arrest and were allegedly hit with rattan canes, kicked and beaten in detention. Yeimo is the only one that currently remains in detention, and has been transferred to Abepura prison. He is expected to complete a three-year sentence in relation to the 2009 incident. This is despite statements made by his lawyers that he received a one-year sentence.