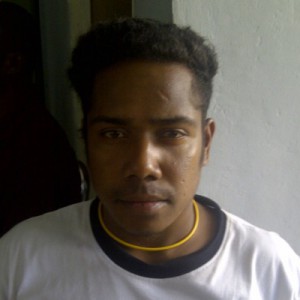 Yantho Awerkion is a member of the Timika section of the West Papua National Committee (Komite Nasional Papua Barat, KNPB), an organisation which since around 2008 has organised large demonstrations around Papua, often calling for a referendum on West Papua’s political future.

The arrested were brought to Police Headquarters at Mile 32 Timika, where they later reported that the police tried to force them to admit to owning and making indigenous Biak arrows, and in the case of Yantho Awerkion, a bomb used for fishing. When Yanto Awerkion denied knowledge of the accusations, police reportedly hit him and pierced his eyes with a broomstick.