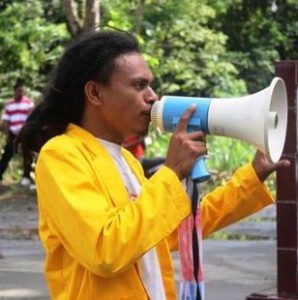 On 7 November, students from Cenderawasih University (Universitas Cenderawasih, UNCEN) who arepart of the Papuan Student Youth Movement (Gerakan Mahasiswa Pemuda Rakyat Papua, Gempar-P) demonstrated against the secretive redrafting of the Special Autonomy (Otsus Khusus Plus) law. Hundreds of student protestors took part in a long march from Abepura to the Governor’s office in Jayapura city, and returned to UNCEN campus to call on the 29 lecturers involved in the redrafting of the bill to present the draft publically. 15 student demonstrators were arrested, including Gempar-P student leader Yason Ngelia.

The students were detained in Jayapura Regional police station and were released the following day at 02:00 with the exception of Ngelia who was charged with Article 351 for assault. Police reportedly stated that Ngelia was arrested on the basis of a crime that had allegedly occurred on the UNCEN campus. The 14 students who were released were forced by police authorities to sign statements promising to cease demonstrations, particularly on the UNCEN campus – a demand reportedly made at the request of the UNCEN Provost.

The following day, on 8 November, around 100 student demonstrators gathered for another demonstration against the Special Autonomy Plus bill and to demand accountability for the ill-treatment and ongoing detention of Yason Ngelia. Jayapura police reacted by arresting and severely beating 16 demonstrators, 12 of whom were released the following day. Police reportedly attempted to coerce the activists into signing a statement saying they were treated well in detention and promising that they would not take part in further demonstrations. However, this was stopped by human rights lawyers. Reports from lawyers state that the 16 detainees were denied food in detention on 8 November. The four students who remained in detention – Alfares Kapisa, Benny Hisage, Abraham Demetouw and Danny Kosamah – were detained until 24 November 2013 when they were released on bail.

On 28 November, human rights lawyers who managed to secure a short visit with Ngelia after initially being blocked by police, found that police had forcibly shaved Ngelia’s head and ordered three other detainees to beat him, resulting in a black eye. Student demonstrators continued to protest his detention, meeting with Chief of Papua Police, Tito Karnavian on 6 January 2014 to demand Ngelia’s immediate release. Despite this, Ngelia’s trial began on 22 January 2014.

After being initially accompanied by lawyer Olga Hamadi, Ngelia stated on 28 January that he did not want legal accompaniment and would represent himself. Alfares Kapisa, a fellow student demonstrator and one of the four detained on 8 November, has commented that the accusation laid on Ngelia of assault was a strategy to keep him from leading critical demonstrations against the Special Autonomy Plus bill. He was sentenced to three months’ imprisonment minus time already spent in detention by the Jayapura District Court. He was then released shortly after on 7 February 2014.

Gempar-P have continued to organise demonstrations  protesting the Special Autonomy Plus bill, which have been repeatedly blocked by police. In one such demonstration held on 11 March 2014, police blocked the demonstration stating that Gempar-P was not a registered organisation with the Department for National Unity and Politics (Kesatuan Bangsa dan Politik, Kesbangpol) and that Ngelia had communicated anti-Indonesian sentiment in his previous speeches.