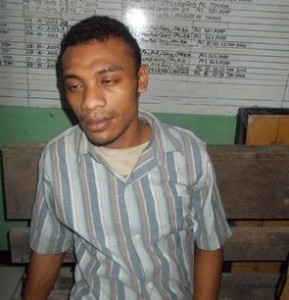 On 1 May, Yohanes Borseren, Oktovianus Warnares, Yoseph Arwakon, Markus Sawias, George Syors Simyapen and Jantje Wamaer were arrested in Biak after police opened fire into a crowd of 50 people gathered for a peaceful flag-raising ceremony in commemoration of 1 May. Reports indicate that at least two people were hurt, including Jantje Wamaer who was shot in the knee. The six men were charged with treason under Article 106 of the Indonesian Criminal Code and possession of ammunitions and explosives under Aricles 1, 53, 55 and 56 of the Emergency Law 12/1951. Oktovianus Warnares reportedly led the flag-raising ceremony.

Local activists claimed that incriminating evidence was planted by Biak Numfor police during the course of the two-month investigation period. Among the items reportedly used as evidence against the six activists are 49 bullets and three cartons of home-made bombs. After several months without legal representation, the six men received legal support from Jayapura-based human rights lawyers. Financial difficulties had previously hindered their ability to obtain lawyers – most of the six activists are farmers and cannot afford legal costs.

Human rights lawyers reported that Yohanes Borseren developed a mental illness as a result of severe beatings he had endured on arrest. On 14 November 2013, Boseren was sent to Abepura Mental Health Hospital to receive treatment but was returned to Biak prison two days later. In a letter presented to the court on 20 November 2013, doctors concluded that Boseren had suffered from traumatic head injury from the beatings he suffered on arrest. This resulted in him developing an organic mental disorder and post-traumatic stress disorder.

In November 2013, human rights lawyers submitted an appeal calling for Boseren to be released from Biak prison and given treatment at Abepura Mental Health Hospital. Lawyers who visited Boseren in prison that month found him to be in a bad condition. He appeared physically weak and confused, laughing sporadically for no reason and not able to answer questions posed to him. His trial was suspended later that month.

On 13 January 2014, the Public Prosecutor demanded prison sentences ranging from fifteen to eighteen year sentences for the five other men. On 11 February, Oktovianus Warnares, considerd to be the leader of the peaceful flag-raising ceremony, was sentenced to three years’ imprisonment. George Syors Simyapen was sentenced to two-a-half-years, both Jantje Wamaer and Markus Sawias received two years and Yoseph Arwakon was sentenced to one year and eight months’ imprisonment. Yohanes Boseren was released the same day and the charges against him were dropped.