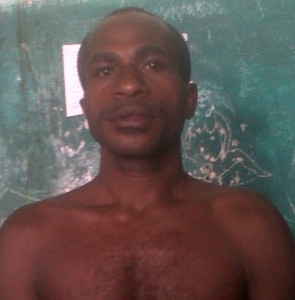 On 13 December 2013, Yulianus Borotian, Petrus Yahones Tafor and Wilem Tafor were arrested in Kerom Regency during a police search operation for an incident they say they were not involved in. The incident involved a group of young men who had been drinking, who blocked a truck transporting wood that been illegally logged. The men were protesting the theft of local resources by security forces. Several police officers who were travelling on the truck called for backup from the Kerom district police station. Two hours later, heavily armed police officers arrived in a police truck and two police patrol vehicles and started shooting directly at the group of young men who were blocking the truck. The group of men threw stones and sticks at the police officers before running away. The clash resulted in the death of one police officer, though reports indicate that the cause of death remains unclear.

Police proceeded to search the surrounding area, shooting indiscriminately into houses and causing extensive damage. Yulianus Borotian had approached the entrance to his home upon hearing shots, was shot in the neck and lost consciousness. Police also approached the home of Wilem Tafor to arrest him. Upon seeing this, his younger brother Petrus Yohanes Tafor threw a stone at the police. Police reacted by shooting him in the hand and the stomach. Both brothers were then arrested. The three men were brought to Kerom regional police station. According to a local source, the three men were not involved in the earlier incident.

Yulianus Borotian and Petrus Tafor were later brought to Kerom Hospital to seek treatment for their gunshot wounds, but because of a lack of facilities they were then transferred to Bhayangkara Jayapura Hospital. They received medical treatment for a month before they were returned to detention in Kerom regional police station.

On 7 February 2014, their case was transferred to the Prosecution. They were charged under Article 170 of the Indonesian Criminal Code for violence against persons or property and were transferred to Abepura prison. Local human rights investigators have voiced concerns that the Kerom police fabricated the contents of the police investigation report (Berita Acara Pemeriksaan, BAP) for this case.

The three men were sentenced to five months’ imprisonment. On 19 May 2014 Yulianus Borotian was released while Petrus Tafor was released on 27 May 2014 and Wilem Tafor on 4 June 2014.