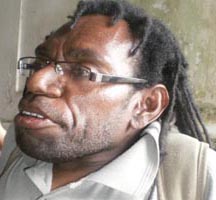 Mr Pakage’s first arrest occurred on 2 December 2004 in Abepura, after the Morning Star flag was raised the previous day. 1 December is commemorated by many Papuans as their ‘independence day,’ because the Dutch colonial government gave permission to raise a national flag on this day in 1961.

A profile published by Human Rights Watch (HRW) gives a detailed account of the demonstration and trial. HRW relates that the day started peacefully, with a demonstration and speeches. (A speech by Filep Karma, who was also arrested that day, can be viewed on Youtube). However, after the flag was raised, the police attacked the crowd. HRW quotes Mr Pakage’s description of events to the court:

“At the time that the Morning Star flag was raised, I was standing with a megaphone and coordinating with the local police. I don’t know who brought the flag or who raised it. I stood between the police and the masses whilst the police were firing at the crowd and the crowd was throwing rocks at the police. I was trying to control the situation so that both sides were cool-headed… The megaphone I was holding was destroyed by a bullet.”

In the trial, Mr Pakage claimed that the police had tricked him. He feared that Filep Karma had been arrested, and the police advised him and around twenty other people to go to the police station and request more information. When they arrived seventeen were arrested, and while the others were released, Mr Pakage was held to face trial. Together with Mr Karma he was charged with treason and conspiracy under articles 106 and 110 of the Indonesian criminal code, and of inciting hatred against the Indonesian state under article 154. In Mr Pakage’s case, initial charges of violence or threat of violence to a public civil servant (article 214) were eventually dropped, but only after they had been used to secure an additional 40 days in custody.

During the trial process, according to HRW, both Filep Karma and Yusak Pakage challenged the court’s authority to prosecute them, claiming they were West Papuan citizens, not Indonesians. The defence also protested the impartiality of one of the judges, after a series of inflammatory remarks. The judge in question had apparently told the police to “Smash in the head of Filep if he’s naughty” and even said “You be quiet, you want to die do you?” to a female protester as he punched and kicked her. The defence lawyers were also subjected to intimidation; a severed dog’s head was left outside the Jayapura Legal Aid (Lembaga Bantuan Hukum, LBH) office with a threatening note addressing the two defence lawyers by name.

There were huge public demonstrations of support for the two defendants both inside and outside the courtroom. The force of this was felt on 10 May, as angry supporters protested the prosecution’s demand that the two men be sentenced to five years in prison. The HRW report indicates that courtroom windows and vehicles were smashed, and the crowd tried to blockade the vehicle containing the two defendants so that Filep Karma could address the crowd directly. However, the police fought back and at least thirteen people – including two policemen – were injured in the clashes that followed. The head of the Jayapura police and ten others would later be demoted because of human rights violations that occurred during these protests, and subsequent hearings were protected by 300 police officers surrounding the court.

On 26 May 2005 Yusak Pakage and Filep Karma were found guilty of treason. Yusak Pakage‘s sentence was 10 years, twice as long as the prosecution’s original demand that had triggered the angry protests two weeks previously. Defending the heavy sentences, the judges said there were no factors which could mitigate the sentences. Appeals to the Court of Appeals and Supreme Court were unsuccessful.

A report in the Jakarta Post indicated that on 24 August, Mr Pakage managed to escape prison for a few hours, running away while a prison guard accompanied him to his house to fetch a book. He used the time to protest the fact that the letter authorising his continued detention was not signed by the Deputy Chief of the Supreme Court, whose name appeared on the letter, thus rendering it technically illegal. However he was recaptured a few hours later at the offices of Elsham Papua, a local human rights organisation.

Mr Pakage was released from prison on 7 July 2010. According to a report on the Media Indonesia website, he had been granted a pardon by the Indonesian President (Presidential Decision 5/G of 2010). The Head of the Law and Human Rights Ministry in Papua, Nazarudin Bunas, said that this was connected to an earlier visit of the Minister to Jayapura, when he had visited the prison. Nazarudin Bunas reportedly said he hoped that this would be a first step to reducing the sentences of other Papuan political prisoners, and that more pardons would be issued.

However, the patterns of repression have not been changed so easily in Papua. Yusak Pakage continued to be politically active, leading a movement known as the Street Parliament (Parlamen Jalanan). Two years later, on 23 July 2012, Yusak Pakage was arrested while attending the trial of another former political prisoner, Buchtar Tabuni. Tabuni had been arrested in connection with a riot in prison 18 months previously, although the arrest was widely believed to be motivated by a wave of intimidation targeting his organisation, the West Papua National Committee (Komite Nasional Papua Barat, KNPB).

Local newspaper Tabloid Jubi reported from the trial; angry at what was going on, Mr Pakage kicked over a rubbish bin. Spit stained with betel nut from the bin landed on the trouser-leg of a court official, Yosias Fonataba. The police came and arrested Mr Pakage, and on searching him they discovered he was carrying a penknife.

Mr Pakage was held for several weeks in Jayapura city police station. Concerned for his safety, Amnesty International issued an alert on 24 August 2012. Among their worries was the risk of torture (in Papua, police detention is believed to be far more dangerous than prisons in this regard), and the fact that despite suffering stomach pains and being unable to eat, Mr Pakage was being denied medical attention. In the month following his arrest, Mr Pakage had reportedly also not had access to a lawyer, and had claimed that interrogations had focussed on his political activism and support for other political prisoners rather than the charge he had been arrested for, which was confirmed as a violation of Emergency Law 12/1951 concerning sharp weapons. The Amnesty Alert also mentions that Mr Pakage had also been arrested three days prior to the court hearing as part of a group of 20 people who had been collecting money on the streets for sick political prisoners.

In interviews with local media website suarapapua.com, Mr Pakage said that he believed he had been arrested because of his background as a political prisoner. He related how Yosias Fonataba had come to the police station not long after the arrest, said that he didn’t want any further problems and forgave him for the incident. They signed an agreement making peace with one another, but then the head of the Abepura police station reportedly cancelled this agreement, saying he had new orders from his superiors.

According to Suara Papua,Mr Pakage was sentenced to seven months imprisonment on 13 December 2012.