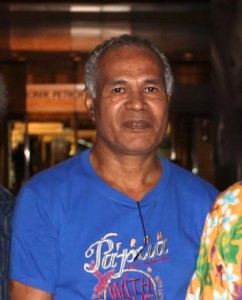 On 28 August 2013, Sorong Regional police arrested four community leaders in the Old Maranatha Church, Sorong City. Apolos Sewa, Head of the Regional Indigenous Council (Dewan Adat Daerah, DAD), Amandus Mirino, Yohanis Goram Gaman, Coordinator of DAD,  and Samuel Klasjok were arrested after a prayer session and statement to the press in solidarity with the Australian civil society-led ‘Freedom Flotilla.’ The four leaders were arrested shortly after the Morning Star flag and some Australian aboriginal flags were unfurled during the gathering. They were taken to Sorong Regional police station for questioning and were conditionally released the next day.

The four men were required to submit a statement to the police agreeing to cooperate with police investigators, to attend court proceedings and to report to the police twice a week. They were charged with conspiracy to commit treason under Articles 106 and 110 of the Indonesian Criminal Code.

The four men have expressed concern about the potential involvement of their wives as witnesses in the case. Since the charges were brought, legal proceedings have been stalled and as at October 2014, the men remain in a legal limbo.