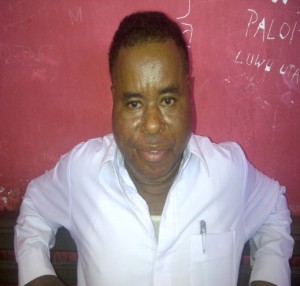 On 30 April 2013, a group of community members gathered at the house of Isak Kalaibin to commemorate the 50th anniversary of the administrative transfer of Papua to Indonesia, with the intention of holding prayer sessions. Reports from local human rights sources state that at around 20:00 Papuan time, security forces comprised of police and military officials in four vehicles fired warning shots which agitated the crowd who then proceeded towards the vehicles. Security forces responded by firing into the crowd for 20 minutes, causing the death of two activists, Apner Malagawak and Thomas Blesia. A third activist, Salomina Kalaibin, the sister of Isak Kalaibin, later died in hospital under suspicious circumstances.

Isak Kalaibin, Klemens Kodimko, Obeth Kamesrar, Antonius Saruf, Obaja Kamesrar, Yordan Magablo and Hengky Mangamis were charged with treason under Articles 106 and 110 of the Indonesian Criminal Code and possession of weapons under the Emergency Law 12/1951. The seven activists received legal accompaniment from the Institute of Research, Analysis and Development for Legal Aid (LP3BH) and members of the Civil Society Coalition for the Upholding of Law and Human Rights in Papua.

According to sources from LP3BH, the seven activists faced restricted access to their lawyers while in detention in Sorong police station. Police reportedly cited Article 115 of the Criminal Procedure Code, which states that in cases of suspected treason, lawyers may observe the interrogation but may not actually hear what is being said. On 26 August 2013, prosecutors presented three witnesses, reportedly two of whom were not present at the time of the incident on 30 April. Defence lawyers objected to the Prosecutor’s submission of these two witnesses – the head of Aimas District government and the head of the government National Unity office (Kesbang) in Manokwari. Defence lawyers also questioned the issue of a flag-raising pole, mentioned in the investigation report (berita acara pemeriksaan) and prosecution letter (surat dakwaan), used as evidence against the seven activists. They argued that that no such object was present during the incident.

The seven men were forced to testify against each other anddefence lawyers expressed disappointment with judges when they moved to accuse Isak Klaibin when he was called to the stand as a witness on behalf of Obaja Kamesrar.

In September and October 2013, human rights lawyers reported the deteriorating physical condition of Antonius Saruf and Klemens Kodimko. When defence lawyers requested access to medical healthcare for Kodimko, judges informed them that they were allowed to visit him in prison with medicine in coordination with prison authorities. Obeth Kamesrar, an elderly detainee of 68 years was reportedly silent since his arrest and appeared to suffer from trauma.

On 3 December 2013, Isak Kalaibin received a sentence of 3.5 years’ imprisonment for possession of weapons under Emergency Law 12/1951 and conspiracy to commit treason under Articles 106 and 110. The six other detainees were charged with conspiracy to commit treason and received prison sentences of 1.5 years each. Judges had considered Klaibin as being the leader of the gathering on 30 April. Defence lawyers submitted an appeal for Isak Klaibin challenging his prison sentence but this was rejected by the Sorong High Court.