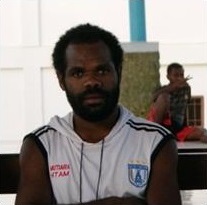 Jefri Wandikbo, an activist in the West Papua National Committee (Komisi Nasional Papua Barat, KNPB), was arrested on 7 June 2012 alongside Buchtar Tabuni and Assa Alua. The three men were reportedly on their way back from a meeting with the Papua Provincial Legislative Council, when they were stopped and searched by the police in a sweeping operation. Wandikbo was brought to the Jayapura Regional Police Station for interrogation when police found a cassowary bone dagger (a traditional Papuan tool) in his bag. According to Wandikbo, he had obtained the dagger at Sentani market to send to his parents in Wamena for household use. On 21 November 2012, Wandikbo was sentenced to 10 months in prison for possession of sharp weapons under Emergency Law 12/1951 for carrying the cassowary bone dagger in his bag at the time of his arrest.

Having arrested Wandikbo on the basis of the cassowary dagger, during interrogations at the Jayapura Regional Police Station, police then accused Wandikbo of being involved in the murder of a taxi driver in Waena on 22 May 2012, and tortured him in order to get him to confess to the crime. A report received from a local human rights activist alleges that Wandikbo’s hands and feet were crushed under the weight of a heavy table, he was stripped and his genitals were repeatedly stabbed with the end of a broomstick. Wandikbo was denied legal accompaniment during the interrogation, and was forced to sign the Police Investigation Report under threat of death if he refused.

Police claim that the alleged murder took place on 22 May 2012 in Waena, but Wandikbo claims that between 10 April 2012 and 30 May 2012 he was in Wamena, visiting his parents. On 19 December 2012, Wandikbo was sentenced to eight years’ imprisonment for the alleged murder under Articles 340 and 56 of the Indonesian Criminal Code and Law 8/1981. His lawyers first submitted an appeal to the High Court and following that a review of the decision the Supreme Court, but both were rejected.