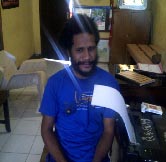 Mansoben was arrested at gunpoint and severely beaten by police, who hit him in the mouth with their guns. He was then brought to Biak Regional police station where he suffered more beatings in detention, being forced to lie down and kicked by several police officers.

In March 2013, a lawyer for the two activists stated that the indictments were excessive, appealing to the judge for their release given the absence of any strong evidence. In June 2013, Mansoben was convicted under Emergency Law 12/1951 for possession of explosives, and sentenced to three years and six months’ imprisonment. Paulus Alua faced similar charges, but has been released. On 29 August 2013, human rights lawyers for Bastian Mansoben submitted an appeal against his sentence.

On 17 February, Mansoben was released pending appeal on a technicality, when an extension for his detention was not issued by the Chairman of the Supreme Court of Indonesia.