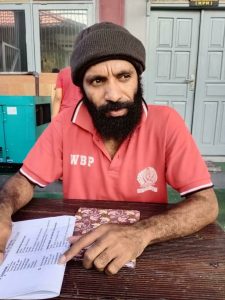 Update:
Stevanus or Steve Itlay was arrested for the third time for his political activity on 11 September 2019 in Jayapura without an arrest warrant. The Papua Regional Police accused him of planning and designing the uprising on August 2019. He told his lawyers that he had been in Timika throughout August and only arrived in Jayapura on 29 August morning. He is indicted with Articles 106, 107 section (1) and (2), and 110 of the Criminal Code.

Steven Itlay is the Chair of the Timika section of the West Papua National Committee (KNPB), an organisation which since around 2008 has organised large demonstrations around Papua, often calling for a referendum on West Papua’s political future.

On 4 October 2019, Steven Itlay and six other prisoners were transferred from Papua Regional Police Detention Center, Jayapura, Papua Province to East Kalimantan Province for “security reasons”. This transfer was in breach of Indonesian criminal procedure law; it was conducted, inter alia, without informing their lawyers and families, and without the requisite approval from the Supreme Court. Further to these breaches, the transfer has resulted in a significant increase in legal aid costs (due to the airfares needed to attend each trial), and has cut the prisoners off from their families and culture.
He was detained in Balikpapan Prison Class IIB, Balikpapan, East Kalimantan Province until his release in August 2020.