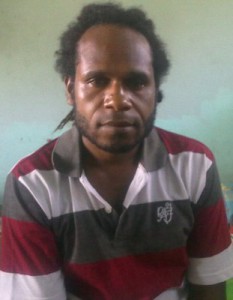 On 4 April 2013, at around 18:30 Papuan time, Atis Rambo Wenda was attacked by an unidentified man in Waena, Jayapura, causing him to faint. When he regained consciousness several minutes later, Waena police had arrived at the scene and brought both the assailant and Wenda to the Waena police station. The assailant was released from police custody 30 minutes later, but Wenda continued to be detained. When Wenda questioned the police decision to continue to detain him, police allegedly responded with brutality and tortured him. He was reportedly stabbed in the ears and hand with a bayonet and his legs were beaten with wooden planks. Wenda was transferred to Abepura District Police Station the same night to undergo further investigations. He was allegedly denied medical treatment for the injuries he sustained.

A report received from a local human rights investigator stated that throughout the interrogation process Wenda was denied access to legal counsel. He was charged with violent crime under Article 170 of the Indonesian Criminal Code and was not accompanied by a lawyer during his trial. On 20 July, he was sentenced to 10 months’ imprisonment. The same report stated that Wenda had allegedly been targeted due to his frequent activity with the KNPB in organising peaceful demonstrations from 2010 to 2012. Wenda had also reportedly declined medical treatment in Abepura prison as he is fearful of potential abuse that he may suffer at the hands of the authorities, similar to the brutal treatment he previously endured in detention in Waena.