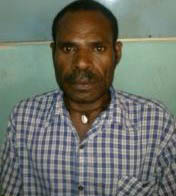 A report provided by a local activist who has interviewed Boas Gombo states that on 27 February, Gombo was on his way back to Yako Vanimo in Sandaun Province, Papua New Guinea from the border market in Maura Tami district, Jayapura, when he was reportedly stopped and severely beaten by Nurdin Makuasang, an Indonesian police official stationed at the border, at around 15:00, local time. Gombo fled Yako Vanimo, but reportedly returned the next day to confront the police official regarding the abuse inflicted on him. The information received reports that Gombo, in a state of anger, lowered and folded an Indonesian flag, while shouting protests against police brutality in Papua. He was then arrested and detained overnight at the Muara Tami district police station.

In detention Gombo was handcuffed and then severely beaten with rattan sticks, metal beams and rifle butts, and kicked by officers wearing jackboots. This resulted in injuries including a torn lower lip, mouth injuries, a crushed ankle and wounds to his knees. The following day on 1 March, he was transferred to Jayapura Regency Police Station where he was interrogated for two days. At the time of interrogation he was not given access to legal counsel. At the end of the interrogation, he was detained in a cell in the police station in a deteriorating condition as a result of the ill treatment he had endured the previous day. He was denied access to medical attention and visits from his family. On 8 April, his case was transferred to the Public Prosecutor and he was moved to Abepura prison.

On 2 July, Boas Gombo was sentenced to nine months minus time already spent in detention, charged with Articles 24 and 66 of Law 24/2009 on the Flag, Language, Symbols of the State and the National Anthem, which carries a maximum penalty of 5 years’ imprisonment. While human rights lawyers requested for Gombo to be accompanied by legal counsel, he remained unrepresented throughout the trial.

On 14 September 2013, local human rights sources report that since 11 September, Gombo’s mental health declined rapidly due to the severe beatings he had suffered during detention in Muara Tami District Police station, including multiple blows to the head. He did not reportedly receive adequate medical treatment whilst in Abepura prison, and was only given sedatives. On 27 September 2013, Gombo was released on parole and required to report to the police for two months.