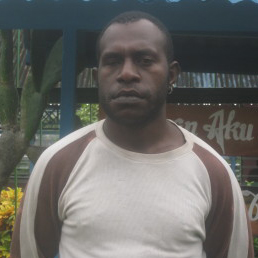 Ferdinand Pakage was a parking attendant in Abepura before he was arrested and sentenced to 15 years’ imprisonment as a consequence of the violence surrounding the events of 16 March 2006 in Jayapura, West Papua. A picket had started the day before, demanding the closure of the Freeport mine in Tembagapura, Timika, and the withdrawal of the police and military from the area. The Justice and Peace Secretariat (Sekretariat Keadilan dan Perdamaian, SKP) later published a detailed daily chronology of the events as they unfolded, which was compiled into a book “Memoria Passionis di Papua.” They record that clashes began at 12:15 on 16 March as some demonstrators threw stones and bottles at the police. The confrontation intensified as police tried to storm the blockade, and three policemen and one Air Force Intelligence officer died in the fighting. Another policeman died from his injuries a few days later on 22 March.

After the clashes, SKP reports that the police Mobile Brigades (Brigade Mobil, known locally as Brimob) carried out a sweeping operation along the road and into the mountains, entering houses and dormitories. Any Papuan they came across was beaten and brought to the Jayapura City Police Headquarters. The next day the sweeping continued, commencing at 08:00 with the police shooting wildly. By the end of the day, 73 people had been arrested. Most reports published later by human rights groups claim that one or two civilians were killed in these reprisals, alongside many injured.

A report by Human Rights Watch (HRW) profiled the case of Mr Pakage, and HRW consultant Andreas Harsono has also recounted a meeting with Mr Pakage on his blog. Both accounts indicate that the accusations against Mr Pakage started when his friend Luis Gedi was forced to give a name by police as they tortured him. Mr Pakage was accused of killing policeman Rahman Arizona, although both he and his family contend that he did not even participate in the riot.

In the account in Andreas Harsono’s blog, Mr Pakage explains that he was being beaten by twenty policemen, and so he said that he had thrown away the knife which was the supposed murder weapon outside the campus. The police took him there to look for it and couldn’t find it. They shot him in the foot, at which point he changed the story to say that the knife was at his house. The police went there and seized his mother’s vegetable knife.

The policeman who shot Mr Pakage in the foot is alleged to have been the Deputy Chief of Jayapura Police Station (Wakapolresta), Adjunct Senior Commissioner Aris Purbaya, according to a 2008 report on torture prepared by the Indonesia Working Group on Advocacy against Torture.

The Indonesian Working Group on Advocacy against Torture detailed the torture Mr Pakage was subjected to on 16 and 17 March. Aside from the shooting, Mr Pakage was allegedly slapped, punched, kicked and struck with a gun-barrel, leaving him with head injuries. The HRW report also mentions that boiling water was thrown at him. No lawyers or legal counsel were permitted to be present during the interrogation of Mr Pakage, and his family were also barred from visiting him.

The SKP chronology relates that on 20 March Paulus Waterpauw, the Director of the Papua Province Criminal Investigation Bureau (Reskrim Polda Papua), announced that suspects Luis Gedi and Ferdinand Pakage had admitted to attacking the police.

A total of twenty-three people were charged in relation to this case, but Mr Pakage and Mr Gedi were given the heaviest charges of all, according to an update on the case published by the SKP on 12 June 2006. They were charged with article 212 in conjunction with 214, para 2, which refers to resisting members of the security forces in the performance of their duties, resulting in loss of life of a security forces member.

After the trial, the ‘Advocacy team for the Abepura clash of 16 March 2006’ published a report into the trial proceedings. Their report claimed that the prosecutor and judges were focused on reaching an outcome that was already decided. The prosecutors and judges also reportedly based their arguments on the initial dossiers which had been prepared during the police investigation, ignoring the fact that most of the defendants refuted the contents of those dossiers as they contained statements made under torture. The atmosphere during the trial was said to be intimidating, with several uniformed and plain-clothes police and intelligence agents present at each session. At two of the sessions, on 17 and 24 May, defendants were injured or received death threats from Brimob members, after they rejected the indictments. On 12 July, members of the Brimob unit brought two family members of the policemen who had died in the incident to the detention room where they produced a knife and threatened the defendants to confess that they had murdered their relative.

An alert issued by Amnesty International relates that four of the defence lawyers involved in the case and three people from human rights groups working on the case were followed and received intimidating messages via SMS, including death threats.

The Advocacy Team’s report also notes that the 15-year sentence handed down to Ferdinand Pakage was three years in excess of the 12-year sentence requested by the prosecutor.

As the HRW profile reports, Mr Pakage was assaulted again in September 2008, this time by prison guards. One guard allegedly struck him six times with a rubber baton, while other guards punched and kicked him. One guard punched him while holding a lock and key, and punctured Mr Pakage’s eyeball. He was not taken to hospital for several hours, by which time the hospital was shut, and when he was finally seen the next day it was too late to save his eyesight.

Although it is the responsibility of the prison to provide for the health needs of detainees, they have thus far failed to do this in the case of Mr Pakage, as with many political and other prisoners. As is often the case in West Papua, this need was instead met by civil society. According to the Warta Papua Barat news website, a group called Solidarity with Victims of Papuan Human Rights Abuses (Solidaritas Korban Pelanggaran HAM Papua, SKPHP) started to collect money for Mr Pakage’s medical needs, as a result of his eye injury.

Articles in local newspaper Tabloid Jubi during 2011 state that the treatment required by Mr Pakage was not available in Papua, meaning he needed a transfer to Jakarta. However the prison refused to grant permission to leave together with fellow political prisoner Filep Karma, who also needed urgent medical attention. Mr Karma, whose medical costs for an operation in Jakarta were also raised by SKPHP, said that he intended to refuse to leave unless Mr Pakage came with him, but he was forced to do so by prison guards and officials from the Ministry for Justice and Human Rights.

On 16 June 2014, Mr Pakage was released from Abepura prison.

Sources
Advocacy team for the Abepura clash of 16 March 2006, “The report of the hearing of the case relating to the clash in Abepura on 16 March 2006 in the Abepura state court,” 21 August 2006, http://www.faithbasednetworkonwestpapua.org/userfiles/files/FurtherReading/GFSR(1).pdf