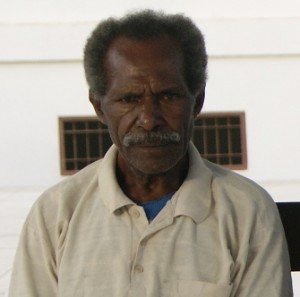 Timur Wakerkwa was arrested together with Darius Kogoya at a demonstration on 1 May 2012 to mark the 49th anniversary of the administrative transfer of West Papua to Indonesia. According to KontraS Papua, the West Papua National Committee (Komite Nasional Papua Barat, KNPB) had called an action, and another group, the Papuan Society Organisation (Organisasi Masyarakat Papua, OMP) was also present. Kogoya was reportedly the leader of the OMP’s action.

The KNPB demonstration had started with a march from Sentani to Abepura, followed by speeches outside the Papuan Arts Council Building (Gedung Dewan Kesenian). From there people started moving towards the grave of Theys Eluay, a Papuan leader who was assassinated by Indonesian security forces.

OMP members were also assembled at Theys Eluay’s grave, where they tried to unfurl the Morning Star flag. According to KontraS Papua, 14 people were arrested, including Kogoya and Wakerkwa, as organisers tried to negotiate with the police.

Later that evening, as a group of around 20 demonstrators were returning to Waena from Jayapura, riding in the back of a truck, an unknown assailant fired a shot, fatally injuring one man, Terjoli Weya, in the stomach.

In December 2012, Majalah Selangkah reported that Timur Wakerkwa had joined with other political prisoners in Abepura prison to call for a boycott of the Papuan Gubernatorial election, demanding a referendum instead.

According to KontraS Papua, Wakerkwa was sentenced to two and a half years’ imprisonment in January/February 2013, whereas Kogoya received a three-year sentence. Their lawyers submitted an appeal to the Jayapura High Court but it was rejected.

In early November 2014, Timur Wakerkwa was released following the end of his 2.5 year prison sentence.